Bit of a speedbump there. I couldn’t place my hand on where I’ve since put some of the books.
If you read only what is comfortable, gratifying and what you get you bog into your cliché until your sweet spot breaks from overuse. It’s not sustainable, is it?
66. Poems: Jim Behrle & Fred Moten (Pressed Wafer, 2002)
There’s some parallels between Behrle’s and McGimpsy’s in referencing those specifics that pass. For Behrle it’s worth mentioning Krispy Kreme and Pepsi. There’s in common subject jumping rather than the rippleless lyric whole. For the first half of a poem,

good to go
please suggest changes
to my breath and head.
breath like dust, climbing
and settling. convey our
sense of loss and regret
with flags and puppets.
at the edge of the party
entertaining portraits of
dead actors. at centre
making a dull speech.
disinterest me again like
a platter of flat hors d’ouevres.

Behrle also gestures to the general, saying actor, rather than pinpoint one and a world noted that consists of diners and urban storefronts, rather than say, undifferentiated city and trees, sky, birds.
Anthem I keep coming back to. It moves in such an expected and yet careful way, built of deliberate small things yet adding up to a sort of cherishing. 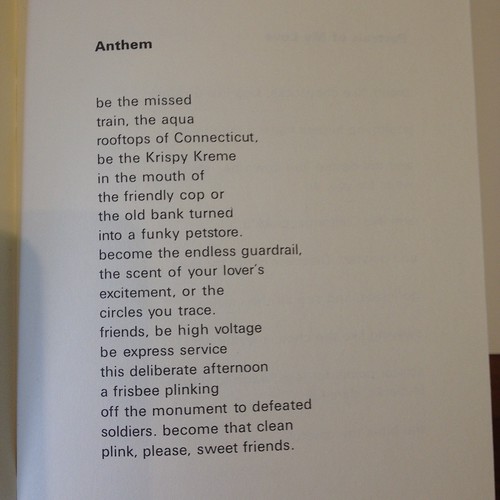 On the flip side of the book was Fred Moten’s poems. This set references music, often entitled for the name of a drummer or singer. I’m out of my depth since it’s probably calling up all kinds of references to songs I don’t know. I don’t know music.
It begs the question of what is reading. To run eyes over words and stare real hard doesn’t exactly convey anything if you can’t follow it.
Here’s one: 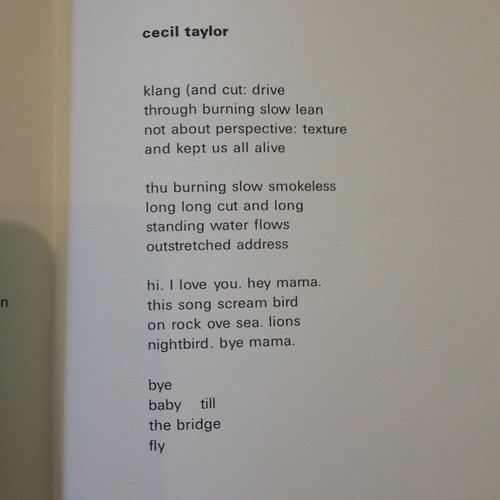 67. Twigs & Leaves Vol VIII: 2014 (Broken Rules Press, 2014)
This is the annual chapbook of poems voted best of the year’s open mic at Ste. Anne de Bellevue is 36 pages. It comes with a CD of 66 more poems recorded live. French, English, code switching between those and Cree. Long as oral poetry goes, but what a neat idea. It’s like an open mic you can hit pause on at any time. Poems range from 18 seconds to under 4 minutes, most of them under a minute long. You can do any poem for 40 seconds and when you can’t it’s like Britain’s Got Talent.
Some snippets from Joyceline Falconer: “the crinkle of autumn about your eyes” “your purgatory I am not”
GT doing it like late night radio talk with a keyboard/synthesizer: “two people inside me./ one wants to be captured, /one wants to be free”
“The things we do not say might have filled the library of Alexandria” ~ R de Smit
“Mission still not accomplished and now I’ve gone and forgotten what it was[…] facing down death, it must have been. ” from a birthday poem by Claudia Morrison.
68. Asbestos Heights by David McGimpsey (Coach House, 2015)
There comes a time in many books when you run out of bookmarks or paper nearby that you can conscionably shred for strips. Then you have to read the whole thing over again because that one you were looking for was not put in there like a pop-up book. Same font as the rest and in the case of chubby sonnets, same shape as all the other poems. The first section has titles about flowers, the second about baseball, the third “a history of Canada: its poetry, its birds, its Prime Ministers and its trees.” With each starting with an I Love Noodles song.
When I put the book against L’il Bastard it seems similar, comparable voice and poems that travel a distance over the length of each rather than rotate like a vignette top. These seem higher contrast, darker, tipped to jaded from cynical, from rootless to restless, proportionally less self-deprecating and more bummed out. In L’il Bastard in “Song for a Silent Treatment, p 84. “I told her in plain language, how I felt./And by that I mean I mumbled a poorly/paraphrased and already cryptic passage/from one of Yeat’s later poems.//When she asked, “What was that?” I said, “Nothing./Nothing. It doesn’t matter. It mattered,/of course.”
In p 46 of Asbestos Heights in a poem entitled “William Faulkner” “One out of every thousand Hart Cranes/does not commit suicide. Tough odds, sure,/but better than the odds of throwing/a perfect games for the Chicago Cubs.”
There’s more reference to suicide, murder and being hated. And more surreal and disjointed in their travel. There’s a point or few in most poems of the latest where stanzas non sequitur as far as I can tell.
Compare p. 31 (below) of L’il Bastard 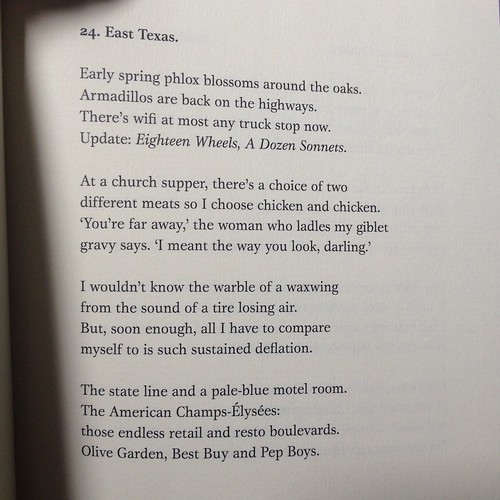 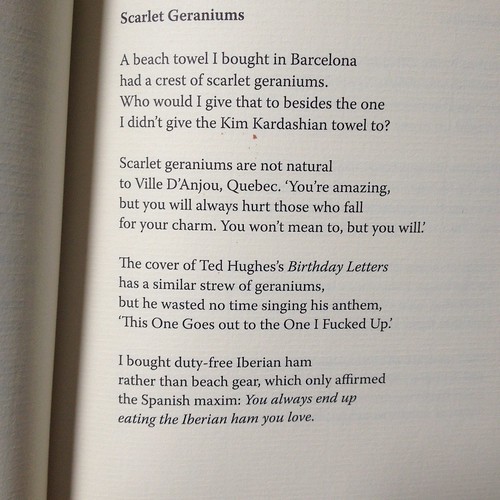 to p. 11 of Asbestos Heights
The thing with McGimpsey’s books is that even when I don’t have any point of reference for the pop culture, it’s the structure, the non-verbal rhythms of funny or pathos. It still reaches. This book seemed an experiment in poetry, poems pushing and shoving within themselves.
In p. 80 the poem entitled, “When Sylvia Plath said ‘People or stars regard me sadly,’ I think she mostly meant people” he flips expectations “Make it new. You learn from old masters,/taking Keats’s ‘I believe you had likes me/for my own sake’ and renewing it/to ‘Wanna do a panel at AWP’?
Why pretend poetry is for someone other than poets? It baffles me when a featured reader presumes there are non-poets and consequently define a stanza or form name.
If you also have points of reference for baseball and movie stars and music world, it may resonate with you more. I mostly got the funny lines of paragraph-long titles and the way it kicked back against pretty nature poetry and easy smooth pretty poetry.
69. Jack Kerouac Book of Haikus (Penguin, 1969, 2003)
First thought best thought? The risk of writing any poetry is to write and “so what?”.
There’s this and there’s that and none of it signifies or its not elaborated enough in the . People are surrounded by things of no significance. How can curating more help?
That’s freedom from overbearing imposition of meaning. Or wasting everyone’s time?

Water in a hole
— behold
The sodden skies

This book made me grumpy but a couple bits were pleasant enought, urban haiku and senryu, kinda. The car speaks to timeless and the moment that passes. The latter being present in a single breath moment, most literally.

My hand,
A thing with hairs,
rising and falling with my belly.

The preface explains that Haikus was the original title so was kept even if he realized later the plural of haiku is haiku.
70. A Really Good Brown Girl by Marilyn Dumont (Brick, 1996/2015)
This comes from the poem as anecdote tradition with prose syntax. “The Sky is Promising” has a refrain of “Danny come home” which added up to something that moved the body even if the mind didn’t understand why or how.
Mostly they are straight up stories although the style and density vary from poem to poem. I liked the phrase you are “as open as/a window in a storm” and how it could mean closed, or letting unpleasantness in.
Lee Maracle’s preface on how it moved her and others, and the impact of the book on people with similar stories was a great addition to the new Brick Anniversary edition.
Funny, Still Unsaved Soul has a lot of parallel convergence with Kay Ryan’s 1985 book (Strangely Marked Metal) that speaks the frustrations and impasses of being surrounded by a religion but can’t believe. 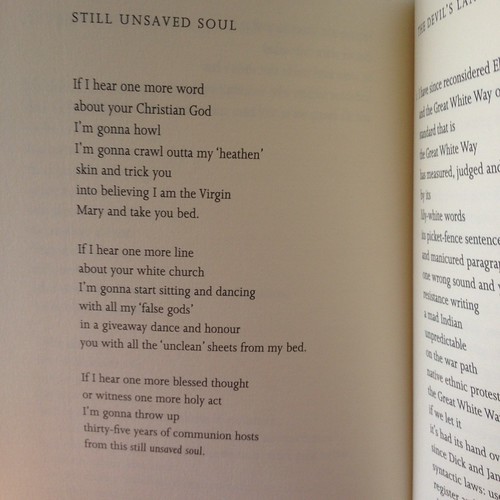 71. Tracelanguage by Mark Goldstein (BookThug, 2010)
There are moments of tickle but by and whole, I don’t get it. Or do but don’t know how to engage with it. With time and mood change, it doesn’t aid. It is about language in language, letting it drift, untether from the original sense and mutate as it translates across languages. The crux of it seems p. 73, 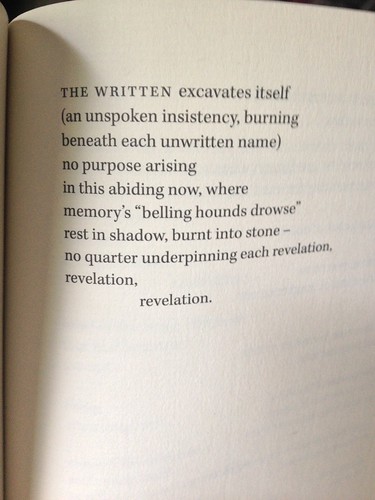 Although p.96 seems to key in on a skeleton key as well. 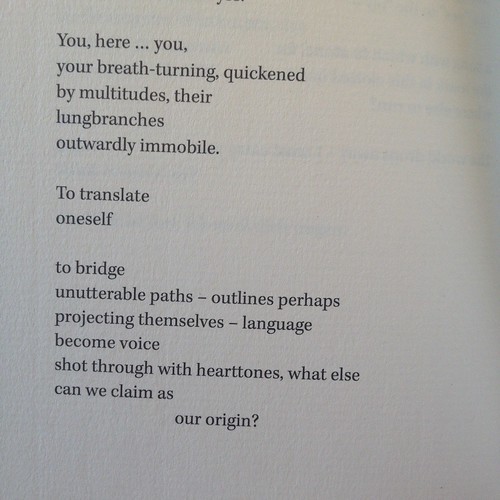 Can I say when I read Gertrude Stein that I understand? When it is an accumulated list of pathogens, do I get the mood? When do I say I’ve got all that was put out to give? Where do I need to position myself to get more or are my rootlets taking in all that they can take it? What is reading? Where is the line of understanding enough to say you’ve read it. If I run my eyes over every character of Russian which I do not read, have I read the book? What is the smallest unit where meaning resides? Is a chance operation, a language procedure an event equivalent to an action to effect a change?
To transtranslate without content only for sound to recombine towards language, into language certainly but not without intent, being led by the language, is that meaning-making, or language-making? Does one fool oneself any more than when listening to semblance of language when people thrust clichés, stereotypes, gossip and weather at one another. What is substance? What is is exchanged? Is it only the act of being together, even if there’s no story telling and no dance of musicality or humour.
The symbolists thought that there was prose-logic and there was poetry and the two shouldn’t be the same. More should be done by the reader.
In Umberto Eo’s Experiences in Translation, “a text is a machine conceived for eliciting interpretations”. How much should the presentation be argument, a puzzle, wheedling the reader or weeding the readers? The transtranslations are cantilevered more than grounded. They build off each other to see where they go. Is it up to the writer or reader to test if that’s somewhere interesting that’s offered. The roles are askew from some differently didactic works.