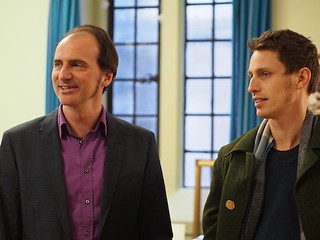 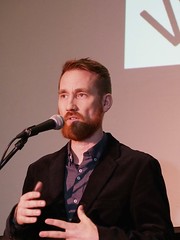 People on Day 1 of 6 of Versefest, including David O’Meara who now has an album with the Hilotrons. Right, Kevin Matthews welcoming people. 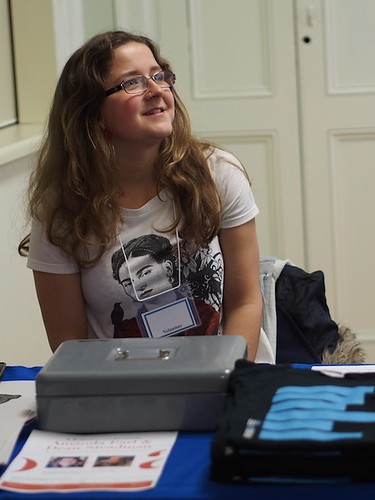 There’s table where you can put out your wares if you’re there — magazines, books, chapbooks, CDs, flyers and Versefest will look after selling it as free extra service to the writing and reading community. 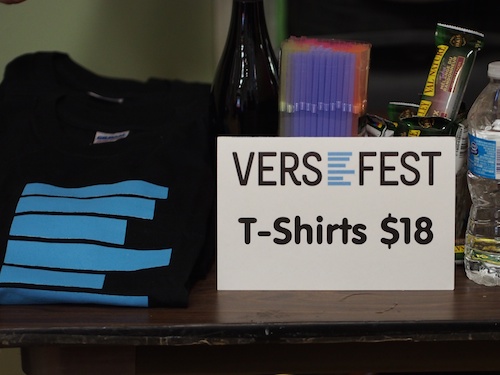 So, Versefest is off to the races: there’s the t-shirt and canteen, the book table with all the new releases and some back list items of featured poets.
And poets — 6 read last night. Liz Lochhead cancelled due to illness, but if you want her books and I’m told they can be hard to get in Canada, there’s at least 3 titles of hers that arrived. 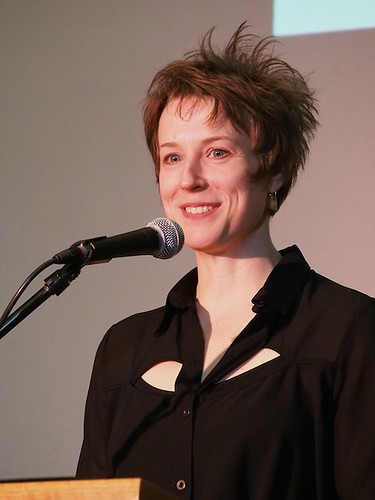 Sarah de Leeuw was the opening reader. She read from new work & Geographies of a Lover (NuWest, 2013). She has poems forthcoming with above/ground and at Arc Magazine.
She works in accumulation for effect. There may be the odd article or adjective or verb but there’s mostly a piling up of nouns. “…heat muscle saline salmon daughter…” It was interesting to hear live the text that I had read. She inflected more, varied more in pitch and speed than the list poems did in my head. I got distracted for a while with the word “calving”. I didn’t realize some don’t pronounce the L and some due so my linguistics brain got derailed for nearly a poem musing that.
She writes about place, including Herschel Island which was a major point of Inuit whaling, back when they were plentiful. Her poem, funnily enough hooked forward to Mary Pinkoski’s poem of bones and their significance. While de Leeuw describes the absence “the quiet is rich, thick, almost fatty”, Mary Pinkoski presented the bones of history to different scenes, as memories, heat, lessons, permanence, to the kid’s binder in school, to the couple in the high rise having sex, to the mother who worries, “these are what you can hold if you let yourself burn”
If geography and place are poetically sparking for you, the Toronto New School of Writing has fieldworks April 5

Lytle Shaw’s most recent critical book, Fieldworks: From Place to Site in Postwar Poetics. Students will participate in a guided discussion of a number of poets (from William Carlos Williams to Lisa Robertson, which hopefully will suggest the wide spectrum of examples available) who have explored the notion of place in their work. The goal is to reframe their work as experiments in both historical thinking and ethnography, and to put that into dialog with the slightly quainter “poetics of place” as a means of repositioning a “site-specific poetics” in a world that is becoming ever more porous and borderless. Students will also have the opportunity to share and workshop their own original work in relation to the guided discussion. 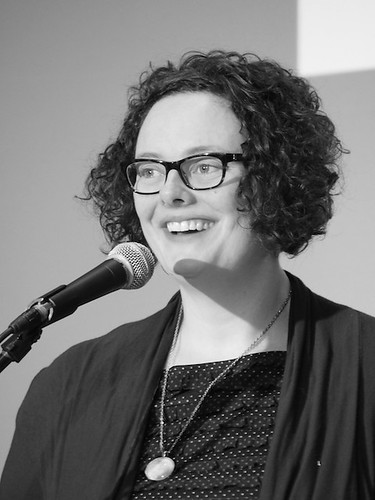 Second was spoken word poet, Mary Pinkoski who is Poet Laureate for the City of Edmonton. She grabbed the room by the lapels as if she were hundred-fisted. And shook the room ever so gently. She’s doing a degree in interviewing people for collecting oral histories. This collecting of stories reminded me of Magpie Ulysses who was at the fest last year.
I heard several people afterwards asking, does she have a book? Are they all sold? Were there CDs and I missed them? She’s got some youtube and soundcloud but not those performed in Ottawa.
She is working on the idea of how we all have stories within ourselves. If we can speak, we must. Her mother and grandmother held silences. In a poem which was a list poem “my throat is” it was everything from an alley to “a library haunted by the books I grew up on”, “flint tongue against steel teeth, there’s a spark”. And somehow over that poem she covered everything from non-violence to fracking to how not to “make the body a coffin” but to speak up or risk being silenced. It had an uplifting tone and encouragement and reminder, “a different way of knowing is a miracle”.
She spoke of the desire to protect but having no switchblade to protect her sister, she made these words. A lot of poems that are more from the bent of cherishing, valuing, unity, rather than acerbic dismissing or distancing.
She also had a poem about olive trees and how in a “perfectly pruned olive tree a sparrow can fly though the libs without hitting its limbs” and how we are not perfectly trimmed and yet the birds keep coming.
Mary has presented her unique style of spoken word throughout Canada in numerous live performances and on radio programs including CBC Radio One’s Radio Active and The Key of A, and CKUA’s The Road Home.
In 2013, Mary placed third at the Canadian Individual Poetry Slam and in 2011 at the Canadian Festival of Spoken Word Mary was voted Most Valuable Poet of the festival and won the national championship as member and captain of the Edmonton Poetry Slam Team. Mary was the winner of the 2008 National CBC Poetry Faceoff. When not performing, Mary runs spoken word workshops for youth and adults. 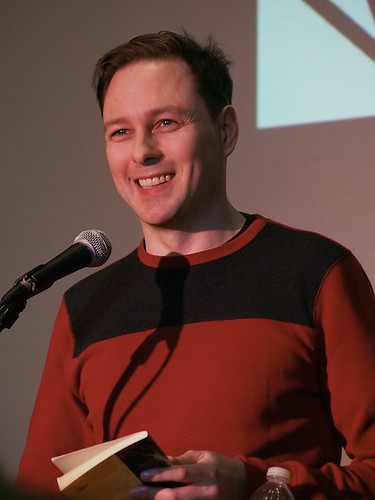 Matthew Tierney read from two books past including Probably Inevitable (Coach House Books), & one future which he joked he might entitle Metaphysics since his last book was about poetry about physics.
He gave all appearances to being uncommonly at ease at the podium. He was wearing his Star Trek T-shirt and made a poem of a conversation between himself and Wesley Crusher. He got a good tickle out of the audience.
His poems are sharp and dense but more in the sense of instruments than switchblade. The intellect is present but also humour without being cleverness for its own sake. For example, “That we use only 10% makes good copy but bad Einstein” or in a poem about people who wake during their operations, naming “pain as illusive saves none of its throb”. There’s a driving intelligence that makes tight lines “Hindsight is hunch in reverse” and also self-examination of what have I done with my life. is there anything that would cause a future scholar to declare “that’s a grave I’d love to exhume.” 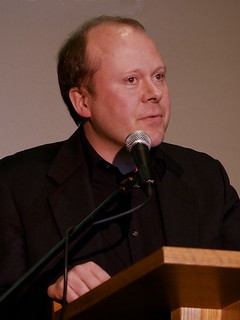 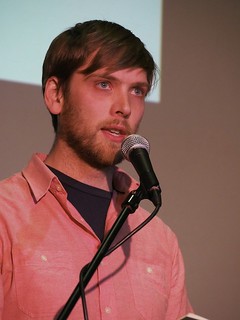 Max Middle introduced the A B Series sponsored readers; first up Andrew Faulkner reading from his Coach House book, Need Machine. The warned possibility of choir practice sound leaking into the space came as he said “watches our sister from a webcam no one knows is there” and again at “It was the year Heidegger walked among us and seemed especially deep.” 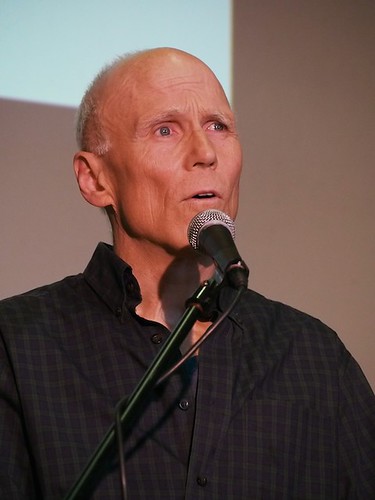 Peter Richardson reading from Bit Parts for Fools (Gooselane, 2013). I was almost though the book before Versefest arrived. I was surprised to see the poem about bird watchers, wife upstairs in her office, husband in the basement office, convening to share stories over tea, was about a particular couple, both chemists and the woman the first to receive a degree in chemistry in 1900, who effectively, he said, became her husband’s secretary from dynamics the prevailed. That seems a more interesting backstory than the front story. Sometimes patter pays off.
He also read his poem wherein a family member resurfaces as a moose. There’s a special moment of communion with the moose who walks out of and back into the forest. “You roved and your roving included me.”
Copies of his previous book is also out for those who missed it. 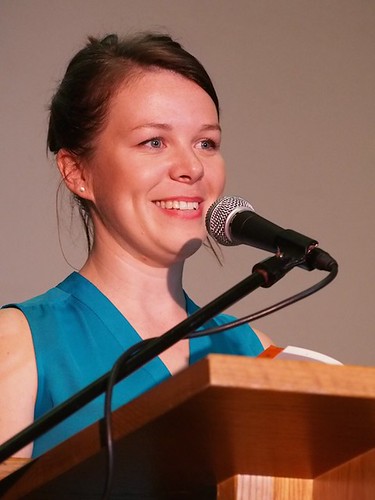 Lastly but not leastly Suzannah Showler was was launching the book for the first time ever, Failure to Thrive from ECW. They are not yet in stores, direct from the printer to the event. Living in Toronto now, Ottawa was her hometown and where her family still is and she had a poem about being drawn back to where you came from “drawn back by whatever is mediocre and true”.
Her poetry was quite striking from the point of view of metaphor. They run around navigating vitality vs. imminent armageddon. “I’m just a little worried about the aperture that lets in amazement”.
She also has a chapbook out with Odorless Press.
And tonight 8 more poets, the women’s slam showcase and those who in/words present.