I have been scrupulous since elementary school to note what draft number a poem is, giving hooks for cross-referencing with date started, how many drafts it takes to end.
Most of the early poems are on paper aka largely lost/mislaid/likely to be foisted at me from one of mom’s sheds, but ones I have from the mid-80s note the date, to the minute, of starting a draft, and sometimes the minute it ended.
I thought maybe there is a pattern, a time of day when I am geared to write most or best. So for future records, I added the time in the margin.
Spoiler: The numbers all fell apart. It doesn’t matter what time of day. I wrote at all hours. The pattern I saw to writing rates was when I took time to do it.
As some people are sure of being their gender, I have been a poet. It was on my secondary school business card.
To go pre-beginning, I have an early memory of being taken to a department store—possibly Zellers in Smiths Falls; it was some other town and a store off my usual path—and was asked to spend time in the toy aisle while mommy did other things.
I was aware of her peeking in on me, monitoring, and looking pleased at the attention and seriouness I gave to the dolls, concluding, maybe I wasn’t a tomboy entirely.
What I was doing with my trusty notebook was noting features of the dolls. Hair, eye, skin colour, size, number of outfits. The sign claimed each doll was unique. I was skeptical.
I had only basic addition and multiplication to work with but when I got home, stomach down, page spread out on the living room floor, I worked out how many variations there were. A fairly small set. Certainly not infinite. And I was satisfied.
(And postscript: I got another doll that Christmas).
Flipping ahead to university age, in paper files I found one bundle from mostly 1992 (but spread from 1989 to 1996) where I sometimes wrote the hour and day but not year, or no date at all. (These I can’t add to the stats). I’d note if it was a rewrite, or came out of a different poem as a spinoff.
One, curiously had the date set for 4pm Nov 20, 2017. I’m assuming that wasn’t placed by future-me but nonetheless I’ll go for the romantic notion and read it in a couple years as I intended.
I started to chart poems in 1991 but the poem files of late 80s to 1993 were on floppy disk, and up and died. What I have references poems earlier. Sometimes I copied over the first draft into the 1993 file to keep them together so this is what I’m measuring in the (eventual) chart (below).
In the early 90s used to annotate the poem with notes on how I felt it failed and what I aimed to do, what I was reading, what poem I was emulating when that was the case, notes on scansion, copy of a model poem, the version number.
Apparently I was reading Atwood in the fall of 1993. Funnily enough my conscious memory declared the good story it preferred: I read one poem of the eye of the needle and never read her again until last year. That’s the way numbers and keeping records are useful for correcting stories.
Over the last year I’ve gone back to annotating poem drafts with what poetry I was reading at the time. It may cause no pattern, just a nice tracking system.
I also started tracking in 2002 and with increasing attention number of poems submitted out, to where, where and when ones were published. But that may be a chart for another day.
I have made: 5,174 initial poem draft from Nov 1991-Jan 2015 and 1,706 poems completed in the same period. That works out to writing a poem draft 18 days per month, although it tends to be nothing, nothing, nothing,…six….edit, edit…nothing… 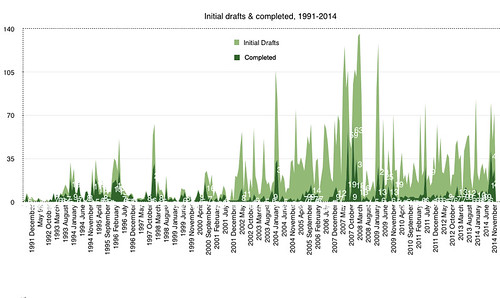