1. Silence by Nora Parker Cox, illus., Anna Bongiovanni (Hucklenut Press, 2016) – breathtaking. It has a refrain of “This is a biography in silence.” It doesn’t grow redundant but forceful of pushback. Cowed into, gaslighted into, correctness cornered into the silence which will not, does not stand. It feels like a coming of (feminist) age from childhood to adulthood, but is neither raw nor expected and processed into a velouté creamy palatableness of regret. It is a setting self apart from the messed up family and patriarchal obligations to blame, second-guessing self’s (“our girl’s”) motivation. It walks thru and on. “The accusation,/which I still fear will come,/the court order,/which I spend every moment braced fro,/doesn’t have to kill me.//My voice reminds me of this/as I try to feel again”
2. Never Mind: poems by Katherine Lawrence (Turnstone Press, 2016) liked the epigraphs but not my cuppa gauzy poems.
Structured as ekphrastic response to paintings, which are never shown. A parallel text of their name, an epigraph and a response are a good portion of the book, except for the baffling 11 page existential conversation and jokes between oxen. Sketch quotes of Pocketbook Memorandum, I liked, such as p. 73: “Said our goodbyes, gathered the last brown egg. Moving west of not knowing.” The response seems duller. I could see some people digging it.
This has a concreteness and elegance: p. 45 “Garden plot responds to spring’s weak light but my jar of yellow ochre is empty spent”. It is responded to with the less catchy, “Faint line tender-sprung beaded romaine blushed oak iceberg line green green bibb deep burgundy frilly French butterhead veined with nerves.”, ending with a bottom of the page note on painting: Salad Days//Watercolour on Note Page.
3. Portraits of Canadian Writers by Bruce Meyer (@porcupinesquill,/Porcupine’s Quill 2016)—  tremendous fascinating book. A CanLit staple. Recommended for the photos, some decades ago, some contemporary. They have no unformity to them but capture some ephemeral moment of a poet in sumptuous lighting.
It doesn’t cover everyone, and how could it, but who it covers it does so with an intimate touch, a conversational sharing about a writer, shared times, how the photo or contact came about. It’s like a memoir that shares, hey, look at this great person, and this person too. It is idiosyncratic rather than “objective” and dry.
On Erin Mouré he says “Her passion for language is almost like that of a coroner for forensic detail. SHe is always attempting to determine causality.” (p. 144)
On (Daniel) Jones he wrote “He published one book of poetry in his lifetime (although I suspect that his output was more prodigious than a single volume), The Brave Never Write Poetry.” He did do more than one volume. I have his Unfinished Monument Press chapbook of 30 pages Jack and Jill in Toronto (1983). It was published 3 years before his photo in Portraits. Guess he means full collection tho.
Another portrait is of Richard Harrison in 1981 (p. 94-95) along with the anecdote from near Saratoga Springs pool room with Meyer, Harrison, Ross Leckie and Lawrence Hopperton. “Everything fell silent when a gang of bikers walked in. The bikers had been there before and trashed the place because the locals were outnumbered. The locals lined up with the 4 Canadian poets, and we stared down the bikers, who who beat a quick retreat. We didn’t have to buy beer for the remainder of our weeklong stay.”
4. Thirty-seven Small Songs & Thirteen Silences by Jan Zwicky (Gaspereau Press, 2005) — slow unfolding of a beautiful soul, breathing. Such elegance and space in the poems, and wilful kindliness and trust towards the world.And we won’t mention the entirely beautiful binding with the titles in spot colour to match the cover, will we? p. 30.  how does she get away with personifying the sea and it feeling okay? With saying instead of showing so much and yet it working? If you are that good, you can bend and break the rules you understand.

Small song on being lost

The sea is lonely today.
Here is is, weeping in the streets again,
as if that could help.

I’ll go visit– out along the old pier
where the fishboats used to dock.

how to call the self in
off the wet streets, how not to worry
if it can’t be found. 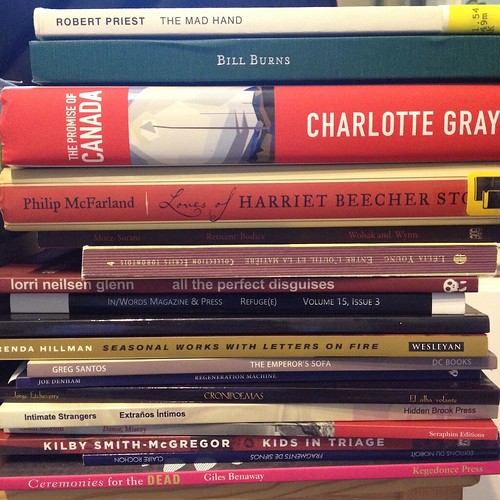 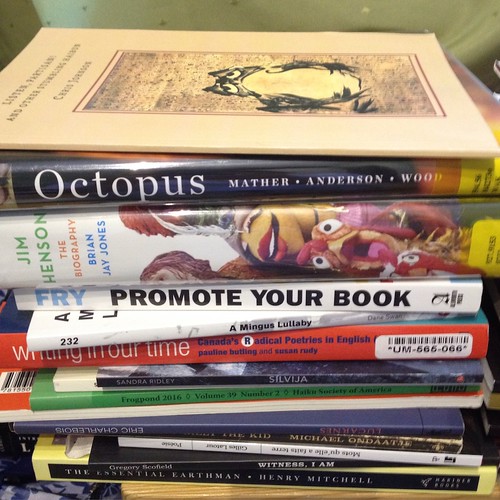 Books I have started, some I read on and off for months or years, being bumped from queue whenever a library book comes in.