I’ve fallen behind in notes on #95books since April when I mentioned book 30. I’m at book 67 now. As with such things, backlog is a stressor. I’ve been reading but not posting here, only on twitter while doing readings, renos, getting spring press titles out and garden in.
I had the notion of chunking it up into 2 or 3 titles and parsing it out every few days. Or in knots of 10. Then of skipping ahead to where I was like I did for the end of last year when it got ahead of me last year. Maybe better to push thru.
Better to do it now before everything goes back to boxes as renovation hits my office and then wait for the sort back to rearranged shelves and re-alphabeticalized. Could be a doozy of a speed bump.
Geography is mostly internal. It is self-selecting to a degree. Geography is inescapable. It is where ever we are. But also whoever we are and whoever we are with.
31. Transmitter and Receiver: Poems by Raoul Fernandes (Nightwood, 2015)
I’d absorbed news of a few people wowed by this first collection. I liked the “attachments poem” where every line is a photo not taken, described in its file name such as “lightsmearedghostsonthegreencouch.jpg” or “jakeplayingwishyouwerehereonmyguitarforthethousandthtimeandallofusreallywanthimtostop.jpg”
An interesting idea. A vague anomie.
Maybe I’m just old at this point. Guy talking about guys in high school. Skateboarders, unfocused people hanging around, wandering around, looking in windows, having insomnia, waking up. Of course, not that poems need be a Van Damme movie. I have a bias against the word girls. In here there are no women only “girls” who are helped, like a shivering girl given a jacket. While true that presenting as young female is presenting a lot of skin that doesn’t well suit a lot of Canadian weather…it’s a funny division of genders. That way humans have of splitting apart by binary gender shows up here.
Largely it is more content connect than style didn’t reach. There’s a fire within and some strong bits in sound and implication and language play. Take for example, p. 46, from the middle of “Driftwood”

Let the driftwood fire converse
withh something in your chest
as if you weren’t there. Let it continue
until the police come down and instruct you
to kick sand over the flames. And before that
someone always hefts a log, burning at one end,
into the low tide. It hisses darkly. Nobody knows
what it means, but it’s not like we are in the business
of meaning things. You take off your grey-green jacket
and offer it to the shivering girl but she shakes her head.
You set the jacket down and it crawls into the ocean”

The more I look at it again, the more I think I want to give it another good look.
32. petals in the dark: 15 renku led and edited by Marshall Hyrcuik (Catkin, 2015)
This collection is spread over years of renka sessions over various countries with the traditional note of hour and place where it started and end. These things can run for 6 hours or more each so become a pub crawl. Seeing how the different moods and spirits moved thru the collaborative poems was fun. I ended up meeting one of the poets I hadn’t heard of before this because I was so impressed with her pieces that I cold-complimented her. Which is what poetry should do, right, connect.
The renku aim to fit the whole universe in any given collaborative chain, in the first few verses a handshake, in the middle going to more dodgy things like conflict, sex, politics then closing again with softer thoughts. A sample from 2009, p. 36, 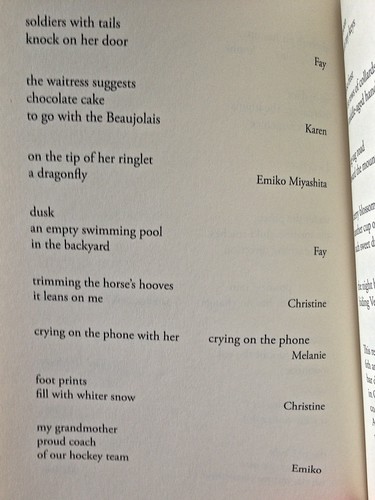 You can see the sense of pivot and these poems are made of the context, mental and physical to capture a snapshot that a camera alone can’t. It gets one contribution from each person present.
33. Liquidities: Vancouver poems then and now by Daphne Marlatt (Talon, 2013)
The poems are characteristically dense. It is striking that both Hastings-Sunrise and Liquidities are the same geography, even if not quite the same time period. Where Simmers sees urban renewal and guerilla gardeners, gentrification and children’s swing, Marlatt sees the down and out, the drunk woman falling off her barstoo, car crashes, fire, rot “(choked) light”, “hi pockets worn with want”. The scratched side of the record has an inertia to it. The signals from the world are closed: “her face displays no interest.”
There’ also an outdoor wading pool in this book and the next on list, but this with menace instead of children’s laugther: “The fury of his look it circles her,/gulls, wading pool, girls— What is a misprized tool?/mistaken want?//Simply momentarily free, cotton/skirts.”
34. Hastings-Sunrise by Bren Simmers (Nightwood, 2015)
This poet’s work impressed me that I got her on the air of Literary Landscape. That play-on-demand podcast is here. The poems have a simple focussed attention that feels like fondness. There’s a orange colour cast to the poem and they have a mixture of forms including some concrete poetry. Reading the book I felt my shoulders come down. Poetry can also include pleasure and beauty. There’s so much preoccupation with kvetching and clever stretching. Lovely read and re-read.
Compare one of the summer scenes
“Days ironed flat as a sheet//residents stoop-sit.//Bathing suits drip.//Back of knees sweat.//On a late-night walk, heat opens//barred windows and doors://
The world opens out in trust. How much it shows, geography is mostly internal.
I mention this book again in recommended books here.
35. Sum by Zachariah Wells (Bibliooasis, 2015)
A universe populated by Stephen Jay Gould, Phineas Gage, David Attenborough, Émile Nelligan, Oliver Sacks…one even after Dodds, Dewdney & Muldoon. It felt in that way a little Lord of the Rings. The first woman on p. 29: Wisława Szymborska, a top of the world poet. Then back to the men, even if chastising male martyrs.

By Christ, I’m tired of the self-dramatics
of martyr-complex men. Get off
the cross, Alan, your lot’s no worse
to bear than any other’s—

Men are named, John Cage. And females are represented rarely and anonymously by role: a woman on a train and a female self-immolating moth. “You’d swear she was made for self-immolation the way she spirals onto ad hoc pyres.”
Any poetry collection is fraught with the fright of offering one’s dreamscape for public analysis. But one channels society and is not formed from nothingness. This was marked by poems dedicated to men, after poems by men, talking about men. I feel outside the circle but get to overhear. Everyone doesn’t have to be accommodated into each conversation because that is demanding a privilege. Should he excise Latin while Fred Moten only talks as if he knows I am an intended listener?
While an offbeat collection in that there’s a style stretch to emulate various writers, it is still all within the firm formalist control. Tightly controlled, essay argument poems, they aim to impact. The set even comes with a tongue-in-cheeky penis poem:

Such a slim barrow into which to stuff
a life; such a narrow beam to cross
and brace the walls. Pollarded and shallow-
rooted, it resists the winds, persists
despite its pruning. Stiff and stolid
in its ramrod stance, it stands, but shifts
and strays when no one’s watching.
It sees the road ahead, but is always looking
back. It asserts and it equivocates.
It makes mistakes. It flirts with grief and grace.
It wears a mask to hide its missing face.
after Erving Goffman

It ends up questioning what it is we present. Leaving it to the reader to ask why and divert course.
36. Warrior Poet: A Biography of Audre Lorde by Alexis de Veaux (WW Norton, 2004)
After reading her biography, I wanted to read her poems. But the biography reading was probably on and off for 3 years. It was a harsh portrait as if the biographer respected her, perhaps obsessed with her but didn’t like her choices very much. She took copious notes, even of diary entries while Lorde travelled to see where her grandmother lived. And would say she gave a speech but made no note of the contents. Would say, this poem was published and not quote it. The gaps were odd. It seems Lorde was a domineering fickle difficult woman. She was frustrated in her life being adamant in her intersectionality before that was a thing. Black women tried to rally but tended to be heteronormative. Queer women rallied but tended to be white. Black people rallied but black among black. And here was Lorde with a white husband and open about many female lovers. She wanted to be pro-woman but not to the exclusion of men because she was raising a son. She was conscious of men being essential to the society. She felt American, but excluded, so sought identity in the Caribbean and in Africa and infused her own personal brew of identity and religion.
37. Collected Poems: Philip Larkin ed by Anthony Thwaite (Farrar, Strauss, Giroux, 1989)
Now this was one sad lad. My goodness. He just kept spiralling down. The course was checked by the editor in that he chopped a bunch of earlier poems to bring up later in the book, which made the impact of both greater. His poems are sharp, acutely so. I wonder if he were born later is he would have been medicated and set on a more even road than drinking his brain to slosh.
38. 384 BC-322 BC Aristotle. “Poetics. English.” (iBooks).
An interesting read along the ride from St. Catharines to Toronto, accompanied by vineyards then big box stores leading the way way to skyscrapers. “infinitely various are the incidents in one man’s life which cannot be reduced to unity”. He explained deus ex machina which was fascinating. Playwright wrote himself into a corner and a Gilbert & Sullivan style quick fix. They cranked actors down out of the ceiling as gods to solve the problems by no means pointed to in what came before. Also, iambic, a conversational sort of meter, was initially done for lampooning, for satires of mean men. I suppose even in bridging languages, the music of iambic run too perfectly still carries that hopping from foot-to-foot effect.