Reading all of these now engage in asking what to bring forward into tomorrow’s present? I suppose all poetry is about what not to throw out. If something doesn’t matter to you, why bring it up or tart it up in font? People have the majority of their lives already comprised of minutiae that doesn’t matter. It’s no value added to swill about some more random curation like picking a personalized licence plates derived from I Ching.
To make sense it doesn’t have to be direct. Being blunt is often more a billboard in front of scenery. What you think you mean is the box around the gift. Mostly poetry, some essays.
Working around the edges of what threads are dangling, in translating cross-culturally or cross-century.
47. The Hatch by Colin Browne (Talon, 2015)
Having heard him read from it I wanted to read it myself. Always a good sign, yes? The long movements in the poems are similar to what David O’Meara’s last one did as well. The roots of the poems are more deeply buried so it may not always be evident what’s going on but there’s an intoxicating reel. A freedom to play shift gears, take flight, keep grounded, let the unconscious muse. They seem poems that are not attempting to be poems but thoughts coming to understand themselves, which I take it to be the fruit of working at poetry since the TISH-era.
The notes at the back are a rich read. More can be understood from direct quote than from an amount of my standing in between it and you so in the poem p. 15, the fire

the past is not the barrow of your sorrow
you’re its wings
lombardies, a winding drive
a failed retirement complex
with flower boxes, hops, scrubbed trilobites with tyres
you can’t hose the unhappiness away”

The tone shifts freely, more like gymnast than square dancer. p. 69, the first half of “form”

what gives with
beauty’s nose
for dismembering
and spite?
when he sang, magnolias
keeled over
stones sought stones
to roll against
the limbs of meadows
arched heavily
“Coxwain, my coxwain
in the dory of my flesh”
when grif struck
wheat wept
bird plucked out
their tails
he grew a trunk, a sycamore
they say
young men sighed
in that shade
he laid down his lyre
and his vanity
the old gods
fumed when
he gave them
the finger

There are twists that I can’t predict which are tasty. A register change in a poem is apt comes with a “see! see!” at some ghost of a grade 10 English teacher telling me it isn’t done. The book rolls around, doesn’t feel like a project book. You have to sit back and watch the poem unfold without trying to logically parse it’s essay. As Jack Underwood put it, “If a poem wanted you to know exactly what it was about, it would be a boiled egg.”
48. Emily Dickinson: Poems, Vol. 2 (1891)
She seems to have some pragmatic observations with this set that have more quip than longing. Reading is such a funny elephant. Half a dozen people read the same work and one grabs a tail, one an ear, one slaps a flank. What struck me “We play at paste/Till qualified for pearl/Then drop the paste”. They are more circumspect poems than the last set. “Faith is a fine invention/For gentlemen who see; But microscopes are prudent/In an emergency.” Satisfaction after struggle is a transitory thing that makes beggars of us all. “By catching at the twigs that grow/between the bliss and me” and it’s gone, that “instant’s grace.” About the size of it, yep.
49. O Cadoiro by Erin Moure (House of Anansi, 2007)
I love the bits of poems that are stitched together, literally with colored threads in colour photo reproduction tying bits in.
Here Moure is translating Galician-Portuguese cantigua, allowing sense and transparency of meaning to falter where it will. Sometimes it breaks lucid,
p. 53,

Walking is not yet prayer

They are often poems of ache and longing, such as p.79 asking mother to not allow her to go see her love “If I go there I’ll die of love”. There are poems of separation and other unkind kinds of solitude: p. 44. “Please waken. I am suffering from so many/ consonant, consoants, and I am/ not a good sufferer”
50. Sonnets from the Portuguese by Elizabeth Barrett Browning
I’ve been meaning to read them. They are here. The more familiar naturally seems better from confirmation bias but that said, it seems the How Do I Love Thee poem stands out for a reason. I didn’t find them all terribly moving nor mind-blowing but not a waste of time either. They feel like a more of a formal exercise than I expected. Suppose it is a working-through “Beloved, I only love thee! let it pass.”
I wonder if she read Bel and the Dragon and when she said she was pulled backwards by the hair into love, was making a religious reference to Habakkuk who was seized by the angel and dragged back to Babylon at windspeed to feed Daniel in the lion’s den.
Although love poems for a husband it feels torqued like an unrequited love, or love between non-reciprocal intensities, not dissimilar to Philip Sidney’s Astrophil and Stella. From EBB’s sonnet 14,

If thou must love me, let it be for nought
Except for love’s sake only. Do not say
“I love her for her smile—her look—her way
Of speaking gently,—for a trick of thought
That falls in well with mine, and certes brought
A sense of pleasant ease on such a day”—
For these things in themselves, Belovëd,

Make an unconditional decision of relationship and fill in the behaviors that follow to maintain such feelings. A bottomless well wanting assurance “Say over again, and yet once over again,
That thou dost love me…To love me also in silence with thy soul.” Or maybe it is more ecstatic jubilation. But as coupleness is negotiated, a fierce: don’t tell me how to be, and let us each be our own selves, she commands,

Accuse me not, beseech thee, that I wear
Too calm and sad a face in front of thine;
For we two look two ways, and cannot shine
With the same sunlight on our brow and hair.

A strong sense of monopolist of love. Giving a lock of hair, which makes sense before years of photographs. But only mother love her hair, then it’s given to the mortician.

I thought the funeral-shears
Would take this first, but Love is justified,—
Take it thou,—finding pure, from all those years,
The kiss my mother left here when she died.

No pressure, no pressure. It almost seems satirical. But then, monolithic intensity does.
51. A Few Words by Czandra (Melinda Cochrane International, 2014) 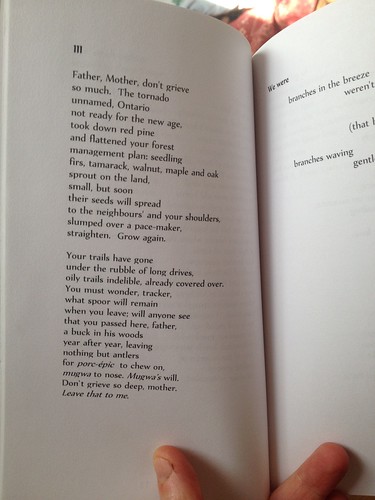 Poems of nature with a river of sound and passion running through them. Some words of native language to ground as tent pegs sideways, not just down into history of geology and all the species around them. Reciting names of species brings us closer to loving them more.
52. Me Funny, edited by Drew Hayden Taylor (Douglas & McIntyre, 2005)
Since I saw Drew Hayden Taylor at Ottawa Writers Fest I’ve been meaning to get another book by him. I didn’t notice that he edited rather than wrote this and its essays on humour. So it’s more sociology of native relationship to humour and art than anything comedic. It explains humour as a coping mechanism for dire situations where there’s alcohol and family abuse.
Some essays were strong. Some dry enough to put the desert in a dissertation. Most agree that you either laugh or you cry and to laugh is to take control. Humour and teasing are ways to maintain order. Whatever happens to laugh is to not lose face.
The book points out some luminaries in Canada’s native leaders. It talks more about visual art and plays.