This set of poems is a coin of two sides, observation of concrete world, and moral engagement.
To my eye it doesn’t look well for tanka and haiku side but it’s not a football match where winner takes the cup, is it?
Thinking about diversity more, what is salient to define? What is achieved with the goal if VIDA and CWILA achieve parity of presentation? What if consumers become indifferent to genitalia-culture and who sleeps with whom (although that’s always interesting, isn’t it)? Do we have a better world?
In putting Diversity as a priority, am I looking for allies with a different skin tint and a different distribution of body fat without changing content?
Should it only qualify as diversity if it’s disagreeable? If my goal is not to reinforce what I already know and agree with in new variations, should I be looking for spy novel authors who are wife-owning neo-Nazi factory beef farmers/Rhino hunters who hobby farm because they already made generations of income from oil money and dog fighting, so dabble with gay-conversion fundamentalist Sunday Schools?
If I’m not willing to change my mind going in, there’s no point in reading. I’d just be propping up by arguments by knowing the “enemy side’s”, creating more entrenchment which is against the point of diversity.
If I read only what is liable to resonate, if that were possible to line up, am I not just in a constant state of vibration and chasing sensation, not caring what is true or valuable or out there. Almighty aesthetics displace the value of people putting a mental construct of art before honouring what is. Again, morality creeps into choice.
Does reading what you like work? Does it build a safe space against the world? Is that what the art is for? There are parallel systems of aesthetics rather than hierarchy. Yes, some things are more perfect for a time and place and particular person. And we go on,
53. Doubleheader: Hurrah for Anything, Poemscapes & A Letter to God by Kenneth Patchen (New Directions, 1958)
Patchen is brilliant and twisted and confounding and wise. I think I’ll collect everything of his.
His Poemscapes,

That oblique yes. It doesn’t parse straight up and yet it is that exactly. Waking before normal time. The quality of light like a different planet. Ephemeralness and constancy. Castles in the sky at earth level so close you can touch them and all seems not daunting. I stopped on that line for miles. People y’all can stop writing now.
It has more density than you’d get from compressing many books. And yet it doesn’t become precious overextenuating of tone.
And there’s crossing some of the same paths but things sitting side by side, coming back to “conversations with mirrors” or “little essays”. Things can’t be said if everything has to fit together like marquetry over a flat square surface. There’s no anticipation of what will come with non-sequitur and yet it is not unconsidered mood blurt.

Friend the Rabbit (72
They were both frowning up at the Tower Room, where sometimes lovely maidens have a hard deal escaping the clutches of wicked (but rich) kinds. He whispered something to his mule, and — bam ! ! ! no castle

Same castle. Symmetry of word or overall picture? It confounds.
As Jack Underwood points out, a poem interrupts a day and has to make it worthwhile for someone to care about what the poem says. The audience has no obligation to be polite if it is not engaging.

167) You’re all nuts
Boobs, scamps, frauds, and you assorted blaugh-swilling drearies — oh, COME OFF IT!

The other half of the book, if you flip it around becomes Hurrah for Anything which have comic illustrations as if bpNichol and bill bissett came out of a tradition.

Kenneth Patchen, Hurrah for Anything (1957)

Perhaps it is time
Does anyone think it’s easy
To be a creature in this world?
To ask for reasons
When all reasons serve only
To make the darkness darker,
And to break the heart?
— Not only of man,
But of all breathing things?
Perhaps, friends, it is time
To take a stand
Against all this senseless hurt.

Many are unapologetically absurd but not patronizing but with a joy to them. The previous book of his I read felt like contraband, like between mattress banned material calling out war in terms of kindness if the way to live. Written decades ago, they are as relevant.
His poems present to an audience, as if people are colleagues, participants. Calling out not a litany of things to be enraged of as if the audience has experienced nothing, but for thinktank, actionbank.
54. A Charm of Finches: Haiku, Senryu, And Tanka by Richard Stevenson (Ekstasis, 2004)
By booksale luck someone was clearing out several of their haiku books and I was right place and time for the windfall of half a dozen haiku and tanka collections. The prevailing idea of these seemed to look outside such as p. 34

two yellow leaves
or a McDonald’s wrapped
in the cottonwood

A lot of wind and sun but not the plumb bob of insight that some have. p. 59. Decidedly gentle humour where the turn is more the poem and poet than the object,

a squad of Cessnas?
No, just the neighbours mowing
meek suburban lawns

< strong>55. ASHINEoVSUN by John Barlow (Exile, 1999)
John Barlow’s poems are much closer to no bars of Patchen. Straight up plain or a wild ride. p. 59 was some solace thru months of pain,

Two Communists
I guess there’s some sort of solace in knowing
there is no solace for some types of pain,
– they’re givens, and you don’t have to tire
yourself seeking out relief from them – those
ones are just solid there, amount to a kind of
strength.

Some poets aim for wisdom lines tacked on like a sticker to close the envelope but one like that, the whole is the point. Expend what you can’t afford to lose trying to escape the pain when you could just accept and get a windfall. Struggling against not fair barriers reminds me of a man who bummed off my grandma who loved him as a son, accepted him as he was. I challenge you to find any man with a wage or salary who works harder than that man to not have to get a job, scheming thru disability and welfare and favour taking up all his time so he’d have less to do if hired. It gave him zip and a sense of compensating power to work around the givens of disadvantage, born poor, poor in school and with literacy, kicked out of the house as a teen. Start where you are. Feet on the ground. If the systems are built against you structurally, set up to trip you up, why cooperate with them?
Another poem, which I will place whole. It doesn’t confuse poem with anecdote or poem with essay or poem with impressionist mood piece by tralalah and error. It isn’t brokering in language, sidelining ideas or audience. It is itself: 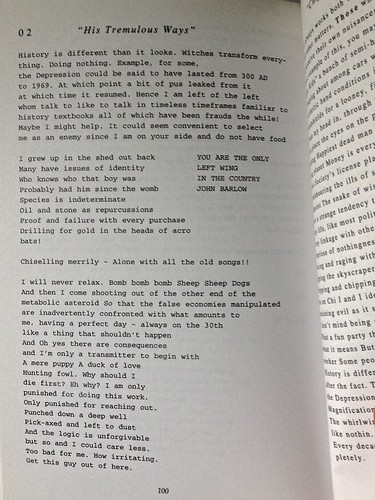 (which you can enbiggen with a click)
56. Islands by Robin Skelton (Ekstasis Editions, 1993)
The intro essay was interesting talking about the history and development, Somonka, Choka, Katauka and other lesser used forms in English. They are deliberately cosmic in scope, not really my cup of tea.
p. 54

Questioning
(Mondo form)
Are you alone?
The wind has a hundred voices.
Will you forget me?
I walk in yesterday’s shoes.
Have you succeeded?
Reeds shiver in the dawn.
Is there no justice?
The spider has altered the ceiling

His haiku are 5-7-5 and have titles which scrape my sensibilities but it’s good to scrape up one’s habitual thinking or else one becomes petrified instead of tree. p. 56

Contentment
This day is enough,
an apple high on the bough,
a cobweb shining

57. Blasts Cries Laughter by Lawrence Ferlinghetti (New Directions Poetry Pamphlet #9, 1988, 2014)
I actually picked it up for a friend and have yet to deliver it. His reputation precedes my reading him by decades. He’s 96 and still scrappy as ever. The chapbook has been edited to amend the list poem, “The First and Last of Everything”, that starts with the dawn of life on earth, to add 9/11, and Obama,

In Blind Poet he says, “I am painting the landscape of my bent soul/and the soul of mankind/as I see it.” It is about life amid the apocalypse, politically, in nature, for homeless, displaced, dispossessed. In “Cries of Animals dying he describes and decries, ” “the daily scrimmage for existence/in the wind up model of the universe/the spinning meat-wheel world/about to consume itself”.
58. Narratives: poems in the tradition of black women, 2nd edition, by Cheryl Clarke, (Kitchen Table Women of Color Press, NY, 1982, 2nd edition, 1983)
This was a lucky bookstore find which took me a while to get to. It’s by Kitchen Table: Women of Colour Press which Audre Lorde had a hand in starting in 1980 to build a parallel black culture publishing industry, focussing on women of colour, open to all sexualities. The press has a blog.
Jaime M. Grant, in her 1996 essay “Building Community-Based Coalitions from Academe: The Union Institute and the Kitchen Table: Women of Color Press Transition Coalition” said works published by the press have “literally transformed the conversation on racism, sexism, and homophobia in the classroom in the last decade.” [Wikipedia].
Clarke is a member of the Board of Directors of the Newark Pride Alliance, which is a not-for-profit organization dedicated to LGBTQ advocacy and programming in the city of Newark, New Jersey. This was her first book in her early 30s. Clarke since went on to publish 5 more books including a collected.
It takes to time and place. 1968, Washington and a mixed race family as riots spread. A good enough man but one who goes caveman and sits all night with a gun in case his castle is attacked too. Nervous, he shoots his daughter coming in during the wee hours. The unfolding is gut-wrenching.
Poems with punch, including The johnny cake (for Charley), p. 45, which starts

Death frees people for new experiences.
At the funeral of my friend’s mother I was to learn this.
As no one in my family I care about had died then
I knew nothing of grief.

It returns as a refrain, each time with a different pitch
The 6 page poem continues, driving with the friend 95 miles south for his mother’s funeral, “the car and inexperience between us”. She describes the rituals of visitors, “by noon the kitchen was stacked with food. The rooms filled with the talk of bold/independent women comforting the aunt.” and the aunt. The brightly lit colourful public moments intercut with private,

the aunt brought me cloying peach cobbler
and watched me it and lick the pate.
She licked the plate after me”
And pages later, “I welcome her hand inside my drawers.?And come for the first time/for the rest of the day./With the same hand she kneads the dough/short/and asks nothing back.”
There are many scenes of home violence, from father and boyfriend, mostly left to be inferred. Much left almost unsaid. p. 23, Gum, 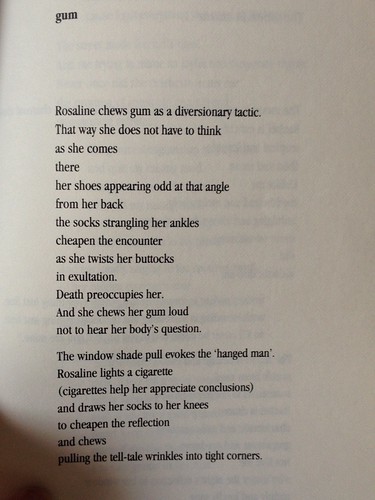