A load of people were involved to write the poems, to pass the word, and do the work and share the event merry-making.
Brian was able to shoot the gorgeous pics that became the front and back covers and the posters, shoot photos of the event and generally be his sweet support. Keven at Allegra Downtown was wonderful and chipper to work with. Omar of A Thing for Chocolate hosted us, fed us and made room in the house so it felt more like a living room.
People on twitter spread the links Thanks: Allison, BookThug, Hazel Poets.ca Chaudiere, and Shery. And thanks to Susan who prompted me to plug the radish. And Kitchissippi Times for spreading the word in the newspaper, and the people who shared the event at FB and told friends and colleagues.
And thanks those who came. Sweet to see friendly faces. Lovely to see half a dozen unfamiliar faces in the crowd. 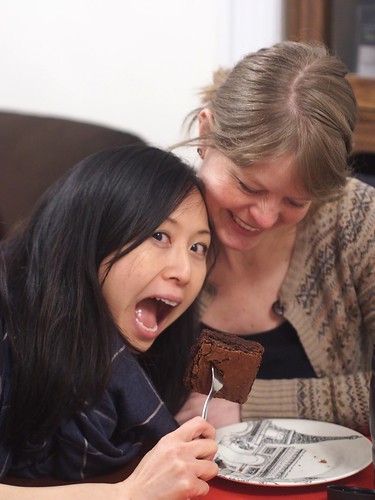 Chocolate was had. (That death by chocolate brownie has impressed but not caused any mortalities.)
And given the crescendo of conversations, applause, and the queue for cocoa, people had a ball. It turned out to be every seat filled plus the ones from the back room, so about 30 people packed in there. A mic was hooked up. Air conditioning was turned on as the snow fell outside the window. 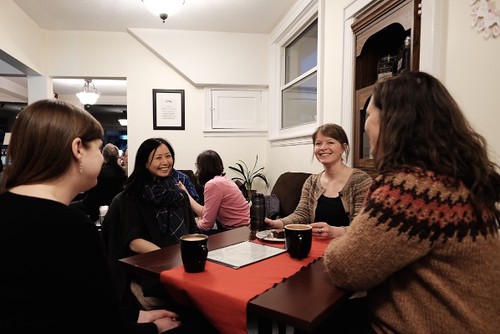 Bri took this photo from the back. People kept drifting in so we started on “poet time”. 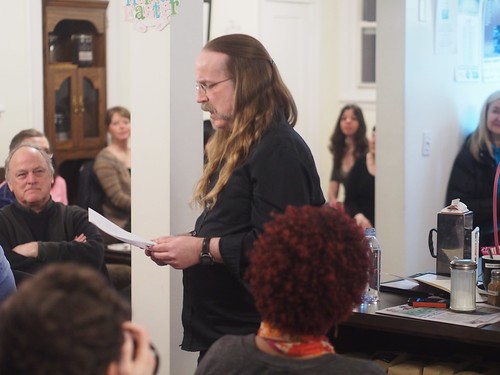 Grant started us off with some soundiness of Epicurus and Krishna. 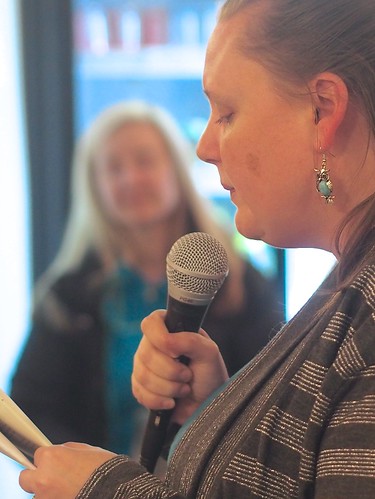 Catina who read two poems, one in the chapbook and one on food, of ricotta pasta, “to comfort and please” just to whet the room’s hunger. Her blog reviews books and watch it for news of her upcoming art show. There’s Natalie: 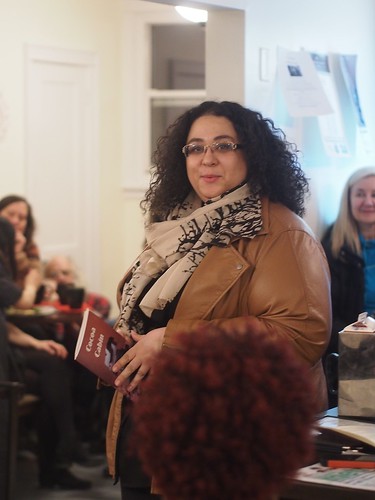 Natalie read the one from the chapbook on the risqué chocolatier, and one ode to alcohol. Maybe I’ll get a sample from the reading up on Literary Landscape next week. 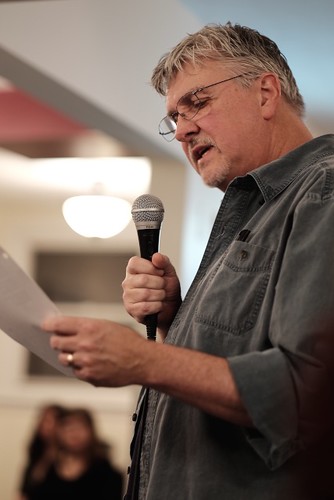 Roland reading from a range of food-poems over the last decade, including ones from Arc and his book. 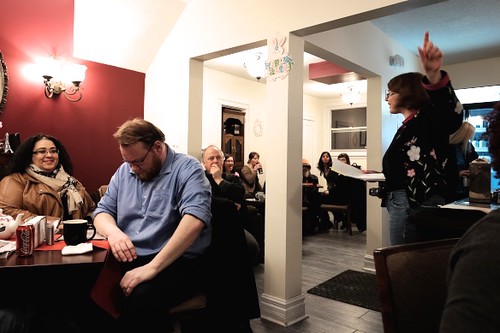 Here I am gesturing wildly. I scraped back into the mid-90s for a range of food, one from Cocoa Cabin, one from the pet radish, shrunken, one from Filling Station, ending with the fly poem, because eating isn’t wholly human activity. (That got a good chuckle.)
This state of many-hatness seems to nod towards Seuss— what with doing the call, the editing, layout, design, publishing, posters, promoting, organizing the reading and then doing the report but writer, blogger and photographer hats are my regular things so I’m back on terra firma here. 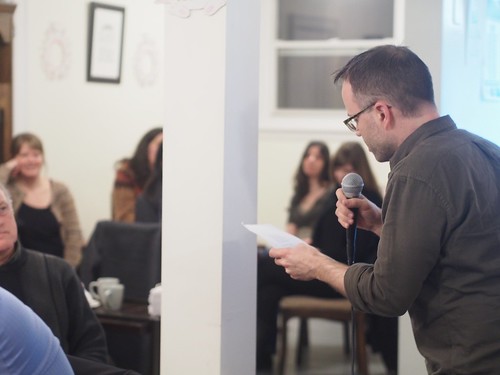 Steven Artelle closed the night in high style. Hopped on chocolate, too bad I don’t have the footage to photoshop his diagonal mid-air.
If you missed him, he’s back at the AB Series April 30 with Cameron Anstee.
There are still some copies directly from me, from etsy, at A Thing for Chocolate.
They can be had at June’s small press fair, maybe at Writers Festival too where on the 26th there’ll be a BookThug Let’s Do Launch of a bunch of us. (Pssst, the radish swag of tattoos should be there.)
P.S. Chapbook includes more poems byMarie Andrée Auclair, Amanda Earl, Susan Glickman, Anna Mioduchowska, Brenda Schmidt, and Lisa Timpf.
P.P.S. Anyone try the chocolate recipe in it yet?