The 2013 Women’s Slam Championship, presented by VERSeOttawa was at the Mercury Lounge Saturday, January 26th. With a $8 charge at the door, the downstairs and upstairs were standing room only. It was a good night with strong voices and stories. It was in the space that Capital Slam uses each Saturday night, including next week. Check it out if you can. This championship was hosted by the inimitable Nadine Thornhill, who tied connections between pieces and added comments with her knack for the apt remark.
Over the last months there have been run-offs for who will compete. The 10 finalists to compete for slots were: CauseMo, Dimorphic, D-Lightfull, Kay’la Fraser, Freedom Writer, Emelie Jaquez, Kimbit, Missaralee, Jenna Tenn-Yuk, V, and (stepping in for Hannah Christie and Elle P) Zorah and Kate Hunt.
The volunteer judges were calibrated by a poem from the sacrificial poet, 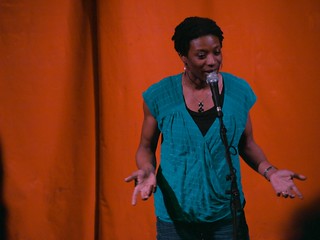 Stargazer. In many of the performers there was strong stage presence, and in some cases intricate things with rhythm, internal rhyme and momentum. Most were memorized, some read from page or screen or used them as notes. I didn’t get a tally from the door but I guestimated that there was somewhere over 80 attending. 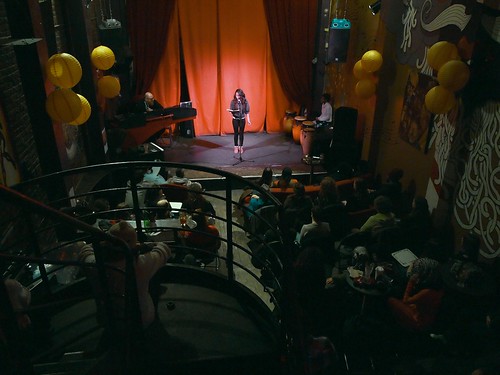 5 volunteer judges scattered around the room gave each poem performance a score out of 10. (You can see a couple white boards from here.)
Nadine read out the scores. If you didn’t like the score, you were encouraged to boo or call “higher” or to cheer the judges if you agree with the number.
The top and bottom scores are dropped and a score out of 30 for calculated for each poem. The scores from the first half and second half were summed to get a final score for the evening to see who was the judge and crowd favorite. Each of the 10 did one poem each before the break and one poem each after the break. Jenna Tenn-Yuk‘s first piece was empathizing with her grandmother losing her husband. Her piece of the second set was about clubbing to dance while mystery men were crude and annoying and going to stay a mystery from as far away as possible. Freedom Writer from the Junior Slam team started with a clear melodic song. She held a room with stillness rather than gesture and went at faster than auctioneer speed quiet and quick in a looping rhythm. She also did a more hip-hop rhythm spoken word about the boy of Uplands Corners who dreams of being a thug, who has a home but dreams of being homeless, encouraging him he can be more. Kimbit did a piece on finding your religion and on finding a man on a bridge, contemplating dark places and hoping by taking time out her life to reach out and talk with him made a difference. You can never stop someone from dying but maybe you can to put it off for a while. She hopes that wherever he is that his “sky is less stormy” ans was urging people to connect with people because you never know your influence. A little friendliness can go a long way but so can a hard word. We’re in the world to help. “Does it matter who? Because you are them, and they are you.” Zorah did a poem on ghetto heaven where maybe the angels that protect you have graffitied you name forever on an abandoned fridge. Her other poem was about and did some word plays, such as “I know love bites but I’m willing to suck out the venom”
Kate Hunt (right) did a poem about story and farming. She wove a chorus of “There is one road there and you have to help.” Isn’t that true. The only way back is communicating with the willing. In the second section she did a Boudicca poem woven with teenage angst of the storm clouds within also being visible without. Emelie caused men around the room to sound out about her seduction of the one who has yet to come. “I’m sorry for all the time you were waiting for my arrival” she said in part along with what she’ll do with him to make up for the lost time when you thought you were ordinary. She can see the he is special and won’t go by some banal term but his real identity; “I will introduce you to my friends and family as Oxygen.” No thud of men swooning but presumably they were holding onto their chairs well enough.
Her other poem was a plea to a drug dealer to look past his short-sighted negative vision of the world and realize the hands of time are going to get arthritis and he can be more, as much as he can dream. Kay’la Fraser is a comedian and can do all sorts of voices. Luckily, if you come to VerseFest’s top woman’s slam night you can hear her and Kimbit.
She started by singing “take me out to the..” poetry game and explained this is not a spectator sport. You all are part of the game.
Like many in the second set her second piece was sexual-spun. “I want to love you…so hard…that diamonds say day-am and I want to love you so slow…that it’s like two sloths giving high-fives”. The whole was hilarious. Dimorphic intercut powerful singing (or sung prayer) for grandfather with a story of going to a native event. In the second round she gave a rallying anthem of how we need to remake gender fairytales for ourselves and our kids. “Glass slippers come with glass ceilings” she warned.
She said, we need stories where its girls who rescue lost boys, relieve them of their shining armour, help “them off their horses and teach them to stand on their own two feet.” It was tight at times. For example here, Dimorphic had a score of 29.9 but an overtime penalty (with half a point deducted for every 10 seconds over 3 minutes) left the score at 26.9. D-Lightfull did the piece she did at Versefest last year of being addicted to a dick and another poem about being overly attached to a bad boy who’s no good. V (on right) for her first set did an angry poem on the same theme of people being attached to each other when they’re not good for each other. In it she dropped the phrase “I’m a phoenix born from this ashtray”. In her second set she did her poem about “I want to get my sex on” on the bus, and various places. The room erupted for both poems of her sets. CauseMo also caused some foot stomping cheering at the end of her piece on make love to me, read the braille of my skin. In the other set she talked about love gone not quite right. “I don’t know how to love myself but I know that you’re doing it wrong”. 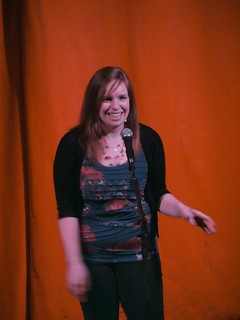 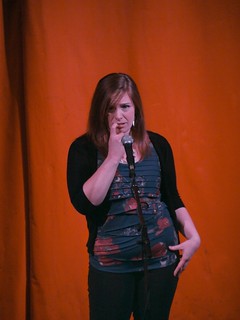 Missaralee (pronounced: Miss Sara Lee) is a dramatist. Her name was drawn from the hat to go second and opened with a strong explanation of No means no and all the ways no is and all the things that aren’t yes so that people who think anything but being punched is a yes get some clarification. Her other piece was a advertisement for consensual sex package for sexy beasts, guaranteed to improve sex lives. 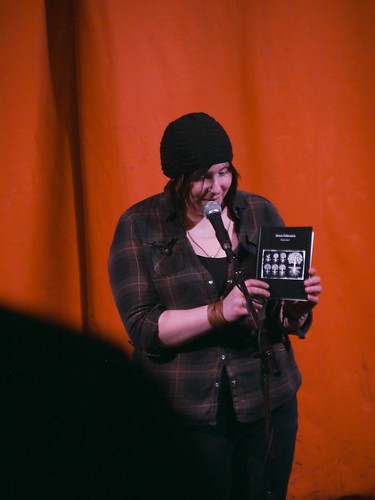 In the end V took home the top spot but before she left, she pointed out her chapbook for sale at the back, Before February for $10.
In poetry, the journey is the destination. If you couldn’t make it hopefully this and the snapshots and snippets help you be an armchair tourist into the words. And there’s Versefest to come.
Last year there was a dead-tie for the first and second place. Second place was shared by Elle P and D-Lightfull. The 2012 champs Sepideh and Festrell handed off their crows to new slammer winner: V. She and the top 3 will compete as part of VerseFest in March. Final scores were with
#4 Missaralee,
#3 Kimbit,
#2 Kay’la Fraser and
#1 V.
Here’s an album of the couple dozen pics that I got.