I meant to stay on top of the writing rates for 2015 and made it, well, halfway thru the year in real time.
What I find at the year’s end is I got published about 10% of what I start. Which is a good thing. I am to pursue fewer things more without giving up the attempting much. Drafts freshen the air.
drafted: 462
completed: 115
submitted*: 56
published: 42 poems (including 21 in 2 chapbooks, not including the ones in the radish book)
*(a wrinkle because I counted as a submission if 1 poem sent or 5 pages, but counted published per poem so they’re not entirely comparable. I’ll fix that for 2016.)
This year has about the same amount completed but had a bump up in drafts over last year’s 269 drafts because of a push to do senryu, haiku and one-word poems. I submitted twice as much as last year but published 10 fewer, although also published more that wasn’t poetry, a short story, a couple essays and a chapbook of trope humour.
Visually speaking to put in context of 3 years, 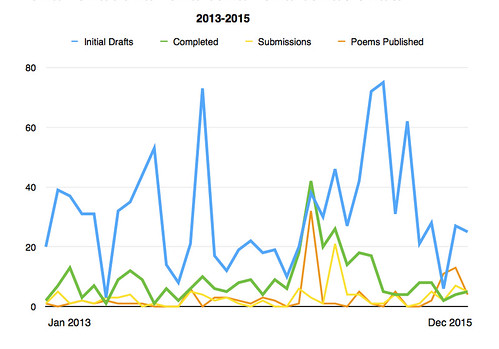 I went thru a longer retrospective last year going back over the 24 years of spreadsheet.