Alright, I admit I’m bogged. I have a couple dozen books left to summarize from last year and the year is getting on. I don’t know if I can pare out the time before February.
Following it is the breakdown on self-audit on categories of reading.
In 2014 I read 144 titles, which is only a couple a week. For a while it looked like I might average out to 3 a week.
3/4 were books, the rest chapbooks. In previous years I left out chapbooks unless I wanted to give one a shout out. To a degree I did that again. The push is to read paper and to finish a book rather than browse about. The push is to read wider. I didn’t count online reading but did count ebooks. I don’t tend to read all of magazines so again they don’t make the list. 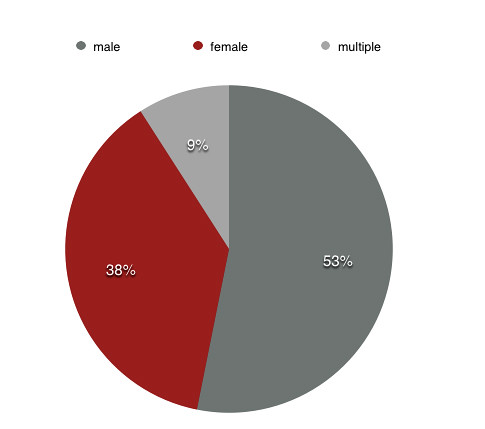 Invisible are people who are writing who are presenting as one gender but may be genderqueer. If the pen name is one gender, I tick that box. With gender, what counts? I If there is a female translator of male work, which gender is the book? I counted that as multiple as with anthology. 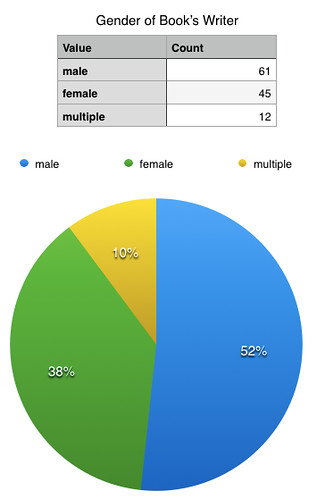 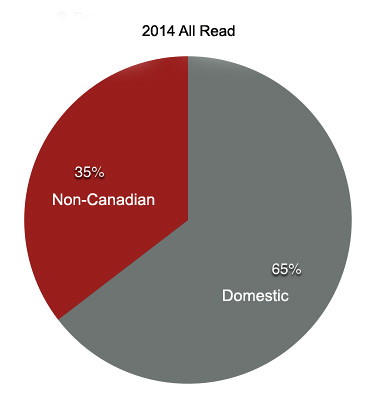 And just the books: 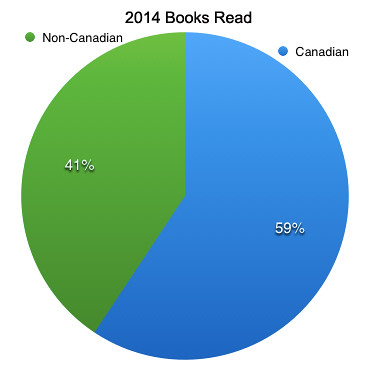 Of domestic vs non-Canadian. With a Canadian writer with an American press, which side do I fall on? f it is a Canadian writer translating a European writer, which way to fall? All kinds of fuzzy zones. Maybe next year I should add a column for multiple for nationality as well. 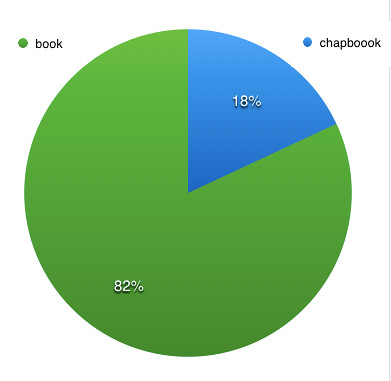 For books vs. chapbooks.
I added genre, generation, and genes.
I added a count, very rough of genre of writing, poetry, or non-poetry. (What finer discrimination does one need? ;)) Mostly the non-poetry was history, essays, non-fiction on typography and memoir/biography. 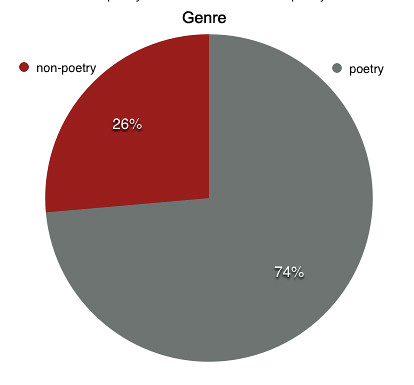 For generation I added year of composition to consider how much is classic vs new and the shelf drop off after something is over 5 years old. 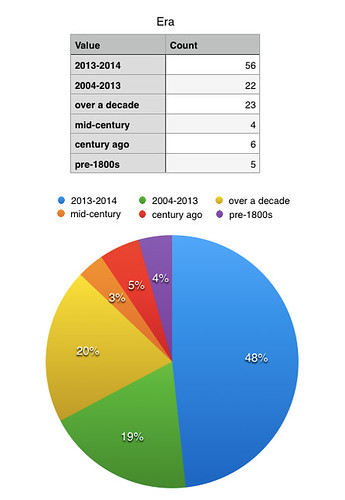 For what I’ll call here, genes, I also added a count of the proportion of visible minorities. How do we measure? Is there a pantone for that? A century ago Irish, dark Italians, Turks, Greeks southern European Jewish were excluded from white. Do we decant to South African’s 1/64th black blood? Here’s a blog list of racialized Canadians. Bloggers of colour. But it’s a complex business. An ugly sort of business when fine-tuning. But without hard numbers how do we know individual or context? Instincts are wishes.
Of course skin tint shouldn’t matter. Do we presume an exoticism that a skin tint brings a different content? But does it? If you read who you know and only know a white enclave, isn’t something amiss in your sense of writers as tribe if there are visible color lines? What’s perpetuated at individual minute to minute level is responsible for the global picture? (See comic, who wants change? Show of hands from everyone. Who wants to change? No one raises a hand.) 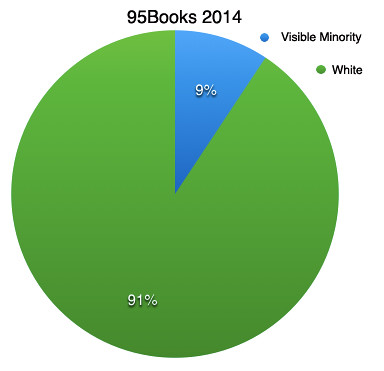 Why is that with Canada’s population of declared being 16% of visible minority [StatsCan] (next census due next year cancelled) I was reading 7%-9% (depending on books and chapbooks or books only by UN definition of books)? Seems disproportionally fewer. although if we consider my geography Ontario visible minority is 6.6% as of a decade ago. But if we look at Ottawa-Gatineau, we’re back up to 16% visible minority.
What’s visible? How to count? Am I asking the right question yet?
There may be people who self-define as native but I am unaware of it. Race being a construction and identity, what do I have to go on for someone’s colour? Malcolm Gladwell presents white to some eyes but self-defines as half-Jamaican. How many do I presume white because I have no data? It feels wrong to make up lists and cross-check cultural background. Here’s my list of Irish Writers, and South African Boer writers, and Scandinavian and Jewish and Australian Aborigine. What ghettos do we paint ourselves into and does it make it better?
To be aware that I’m reading mostly white Anglo Canadian is good to note and inquire into why and how. It would seem reasonable for demographics to consider French vs. English. I read slower in French but i pecked away at some french poetry and am working on reading more. Some I read in translation. I could do more. Goodreads has a list of French CanLit in English but it’s all novels: French CanLit Novels in English. Canadian Literature has recommended French Poetry in translation and the anthologies cover dozens of poets.
What other categories of voices? invisible minorities? Stories by people with strokes, or cerebral palsy or depression. Depression as a swatch would probably cover so many writers that would not be salient.
There are gaps. For some books I have no clue to sexuality or gender. Some authors I could google around for the data, some not. What of writers that are bi but not politically so like myself, or it hasn’t percolated as part of public bio? These are presumed het. If one isn’t writing about sexuality issues is it relevant for demographics or only people writing about sexual dynamics het counted against someone doing the same while in the GLBTQQ? And what to do with poly? Is that under GLBTQQ? 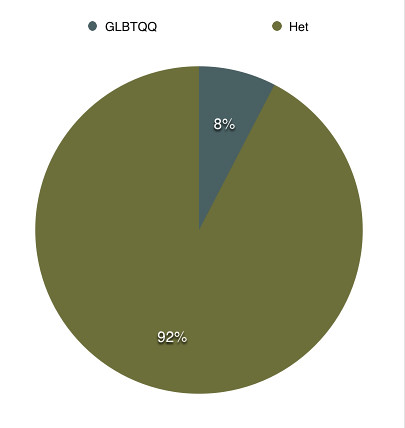 So, for paying attention to whose stories I am listening to, I added a count of queer writers. Here’s a list made by Casey of 2014 in the CanLit queer writers section: 2014 of queer CanLit.
The whole shebang was: