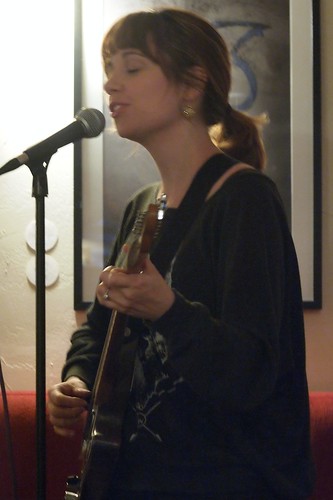 Jill Zmud (who you can hear on iTunes) was the featured music at the Bywords Quarterly Journal launch at the Manx Pub on Sunday the 27th. It was special not only because of her sweet music singing of the prairies and her a capella voice, that had half a dozen people I saw reaching for kleenex, but because it was a milestone launch.
Volume 10, No 4 marks 10 years of the Amanda Earl and Charles Earl team putting together a quarterly print magazine of the best of the online monthly bywords.ca poems. It also marks the last print issue. The online magazine will continue, with submissions open to Ottawa writers on the 15th of each month. The annual John Newlove Award for best of the issues will continue, but the paper end of things is over.
I have almost every issue of this iteration of BQJ and the previous Bywords print calendar with poems, back to the early 90s.
Honored to be in this issue, and able to make it to the reading were these 6 poets. 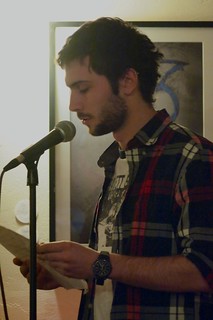 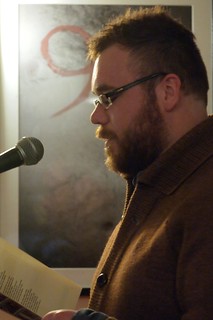 Dominique Bernier-Cormier and JC Bouchard were reading at the open mic, this being Dominique’s first public reading. Dominique’s words in cold beats struck me as he read: “how deep do snow roots go, mother? deeper than those beets.//what do you know about the horticulture of winter” Beautiful.
JC Bouchard got the rapt attention of the full house with a poem about Barbara Gowdy and macabre cadaver trail of the lines with a surprise ending that caused laughter. 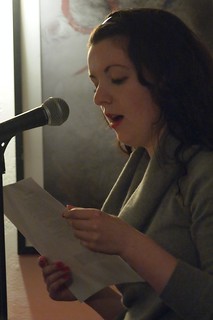 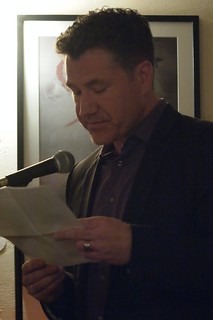 Heather Davidson and cb forrest
It’s always nice to see new and returning faces on the scene. Ottawa, swear is 1/10 poets by volume.
In Heather’s poem called Rimbaud there’s a part that struck me and it’s funny, reading it again, I see no trace of mother-daughter relationship that I heard in the air.

Shaving, I remember being insistent
in that house with no mirrors.
That she know not to cut my throat
like a cow in the marketplace.

It struck me the relationship of barbarous, barbaric and barber.
cb read one from the issue and another that tied in well with Bouchard’s in that serendipity that readings sometimes have. It has a similar movement, seeming to talk about the dark matter, in this case, isolation and disorientation of senility but it twisted at the end to relieve the audience with the sort of venn diagram of meaning that it could be that, or being lost at Ikea. 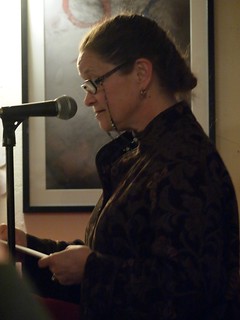 Catherine Ruth Taylor
Catherine’s poem, May the Second was all the small preparations made for another kind of leaving, a father on his deathbed and preparing the grounds and gardens for “after”. It is leaving in a different way in the sense that one can resist and regret in advance or embrace what’s left.

Despite being a death poem, and because of it, it felt life affirming.
At the reading, the usual hat was passed but this time it was the annual fundraiser for Cornerstone Women’s Shelter. For $30 they can feed a woman in need of emergency shelter for a week. For $100 they can do job training, get counseling. Cornerstone provides

Thanks to Ottawa’s generosity Bywords raised $536 for them, almost twice of what was raised last year.
When poetry, music and money come to the good of each other, it’s always a beautiful thing.
Thanks for all that you have done for poetry and continue to do with and for poetry Amanda. Ottawa is very lucky.