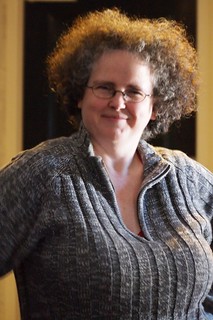 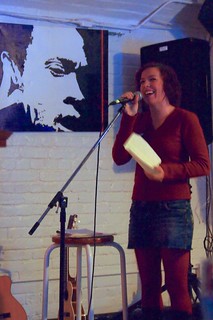 Cathy (left) hosts, and has since 1996-99 and 2003-now. That’s 13 years, folks, at once or twice a month.
The Dusty Owl has flown to a new roost in Mugshots at 75 Nicholas Street Old Jail, now a youth hostel. It is in the space that used to be the prisoner’s chapel, now serving beer and grilled cheese. And poetry as well as music on occasion. And waggly arm welcome woo to everyone from everyone. 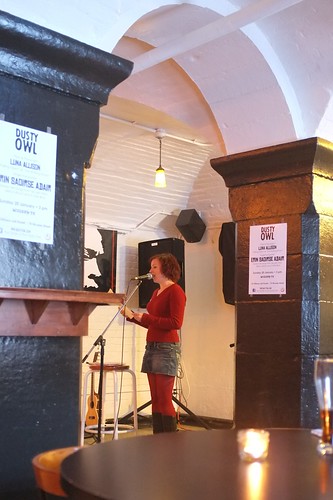 It’s a good space acoustically. The vaulted ceiling distributes sound well.
Luna Allison was one of the two featured there yesterday.

Luna Allison is by turns a page poet, spoken word artist, playwright, journalist, singer and an actor. She has been featured in numerous literary and spoken word series, festivals and venues across North America and heard on CBC Radio. Her award winning first play, Falling Open, has been featured at the Ottawa Fringe, Montreal Fringe and GCTC’s undercurrents festival. Luna is currently working on a new play about sin and friendship, along with a collection of poems about patience called The Waiting Room.

I first met Luna at a Dusty Owl writing circle (in I think, 2007) and was knocked back on my heels by the piece she wrote. Presence of greatness. Hand in my writer’s pen sort of moment.
She did a set of new work, older, poems, relationship stories interlaced with song. Fabulous. I’ve heard her piece “Buttercup” at another series and it was no less powerful for another time. It is about a female walking while smarmy dude checks her out in detail and the anxiety of that feeling of powerlessness under someone else’s intent, how it “pulled back the slingshot of my heart, chest tight”. 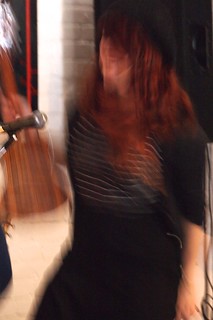 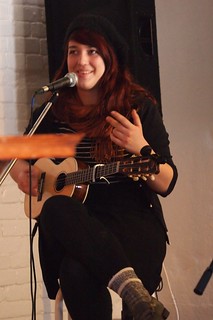 I like the motion shot of Erin even if they aren’t recognizable as her exactly.

Erin Saoirse Adair is an Ottawa vocalist and multi-instrumentalist who is a member of the feminist folk trio Three Little Birds as well as having her own outstanding career. Her sweet, bluesy and longing voice can trace the influence of poets and composers. From Walt Whitman and Sylvia Plath to Joni Mitchell to Yann Tiersen, all can be found flowing through the startling water of her words. This past October she released her first, self-titled solo recording.

I heard of Three Little Birds from a couple directions with a message not to miss them if you can help it.
Her voice has a range and her guitar could heat my palms. There’s a brain and body to the music. She has a way with a guitar, kazoo, ukelele and waltz to lullaby and a bunch of kinds of music I don’t have words for. But I do have the CD for it.
A lullaby for Lemonade and The Ugly Song about the absurdity of beauty industry and other things. Songs with thick lyrics. Poem, er, song, of a thunderstorm stopped me warm. Lovely.
Dusty Owl is also open with open mic. Sometimes there aren’t many that sign up. This time there was 2 or 3 to start. Including a first timer who riffed about the connection between chess and porn and how life is lived generally with great enthusiasm to start something new before all the complexities rush in.
Festrell did 3 pieces of Steve Sauvé who died 4 years ago and 3 days before. I remember him doing those pieces at Dusty Owl. As I quoted Kunitz in the previous post” Every time we read a poem from the past we resurrect the poet.” The poem on the true church being sex and orgasm is fabulous. And it chimed wonderfully with Luna’s short story of a dom helping her older afternoon lover discover that maybe she isn’t straight.
Then there’s the Object of Desire portion too where some common, dollarshop, or generally odd household object is offered as an inspiration…a plunger, a pillow, a ceramic knickknack, or in this case a welcome sign.
Only Festrell and I signed up for the object at first but then 3 more piled on to do instant performances (poem, story, dance number, whatever) inspired by the Object of Desire.
Talia gave a piece on how we define our welcome and boundaries of inclusiveness from wheelchair accessible to anti-immigrant exclusions. Another sang some version of Sign, Signs. that was fun. It was all very classically Owly.
Eventually it came down to a clap-off between Festrell and me and I was sure I was beat. I’ve admired hir poems for years. Ze performed at versefest a poem of being rebuked for not honoring hir heritage and for giving a moment’s notice to those who don’t, knocked the wind out of me.
Ze can punch power into words in a way that I can’t. Hirs was like an anthem and moving. Mine was kinda soft and billowy as poems go. 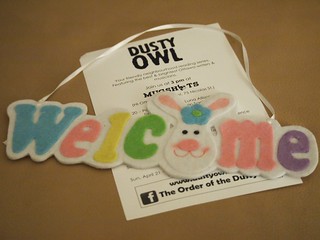 By the clap-o-(stompa-hoota)-meter which is Cathy I took home the prize. All the object of desire pieces that have won, apart from the ephemerals of dance numbers and some songs, will eventually get collected up into a Dusty Collection. 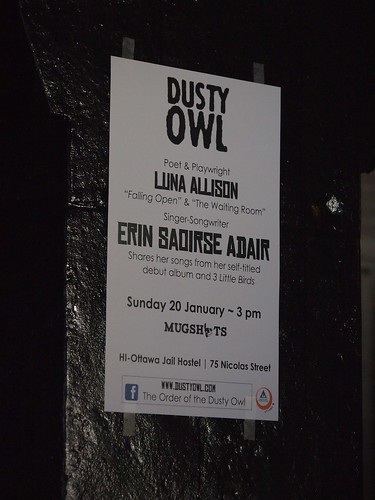 Feb 15th will be the Dusty Owl Versefest Fundraiser with Senior Citizen Love Poetry with a contest for best, sexiest, saddest and funniest lamest. There’ll be prizes and an artist doing a painting on stage at the time.
Feb 17 they’re back already with a fundraiser for the Black Youth Conference featuring the poetry team for the Youth Poetry Slam.
March 12-17 they’re at Versefest at Knox Prebyterian on Elgin.
March 24th Raconteur Win ten Holder and Singer-Songwriter Dynamite Motel who apparently is mind-blowing.
Sun April 21 Poets Sonia Saikaley and Alexis Kienlen take the stage.