Kevin Spenst spent yesterday poem-bombing Ottawa. He’s towards the end of the biggest poetry tour possible for the smallest wee books. When he gets back to Vancouver he’ll hit 100. Kingston gets him today and St. Catharines, soon.
And last night the Factory Series Reading happened. What a fun time. Good crew of audience with a mix of regulars, newcomers and occasionals. 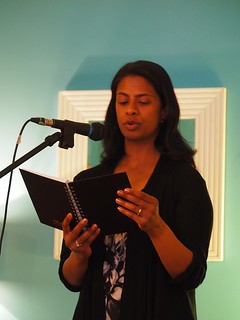 Sneha Madhavan-Reese read from a few of her poems. Here’s two bits:

my father spends his days
watching signals sent from India
via outer space. How small
the world has become.

just back from work, suit jacket
over his arm. I had his features, his silence. He had
my eyes in his face.

Her poems have classic balance of external and internal, profound turns and fond compassionate gaze at her subjects. Her collection is set to come out from Hagios in 2016. 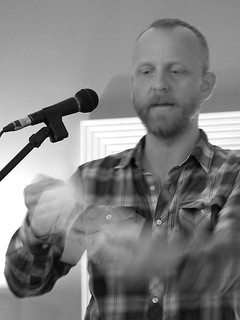 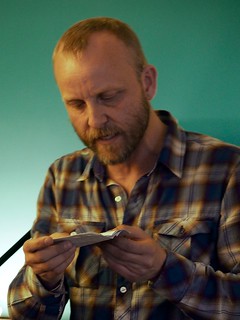 Kevin Spenst brought all kinds of beautiful little papery things, including this new one which is an interaction with bpNichol’s love poem. 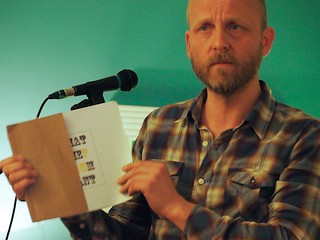 He gave a high energy entertaining lope of a reading, greeting scenes seen in his travels. Lot of laughter with his comic touch for keen observing.
For those that missed his sold out sonnet chapbook, that will be rolled in part to his collection next year with Anvil Press. Watch for his tour. Flag it down if you can. 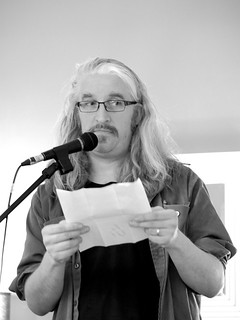 rob gave a skeptical introduction. He doesn’t believe we could build a trebuchet? Why, wat did you do at Easter? I meant to say a bit of the history:
One of the last occasions on which the trebuchet was used with success was at the siege of Rhodes in 1480 as described by Guillet in his ‘Life of Mahomet II.’ source] Gunpowder made the trebuchet’s brute flipping obsolete. It was used again militarily with less success,

At the siege of Mexico by Cortes in 1521, when the ammunition for the Spanish cannon ran short, a soldier with a knowledge of engineering undertook to make a trebuchet that would cause the town to surrender. A huge engine was constructed, but on its first trial the rock with which it was charged instead of flying into the town ascended straight upwards, and falling back to its starting- point destroyed the mechanism of the machine itself.

And all that turned towards the good of poetry. 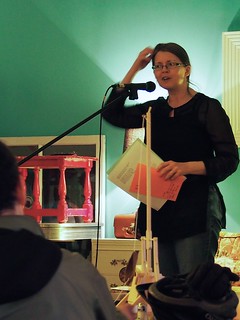 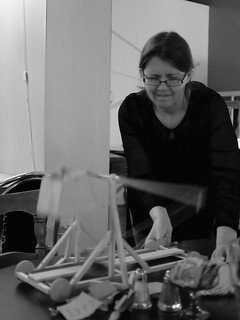 I read some from the vertigoheel for the dilly and some from the new June project with Michele Provost to come out in Aylmer and likely in Ottawa with a few people. And some of the Apostrophe and Semicolon sonnets. Then I shot candies. The poem-papered one had impaired flight capacity.
The candy projectiles were with poem fragments from each of us to take home. A sort of party favour. Here’s a few examples,

after using the same scented soap, sweat becomes
its morning smell, so soap becomes dirt.
Pearl Pirie, Factory Series, April 23, 2014, Ottawa
you only believe in the bedbugs that bite you.
everything but your own eyes is soft-headed rumour.
Pearl Pirie, Factory Series, April 23, 2014, Ottawa
K Spenst ‏@twinnegganswake Feb 24  He who runes may rede it on all fours. OCD, necker, trestle, crumbling play! Sell me the process sooth @mtrimpe humbling buzzwords of self
Factory Reading Series, Ottawa, Apr 23, 2014
K Spenst ‏@twinnegganswake  First we feel, then we fall – , then we try to translate Finnegans Wake on our iPhone, then we make a video… http://tmblr.co/ZQIycx-U_DC3
Factory Reading Series, Ottawa, Apr 23, 2014 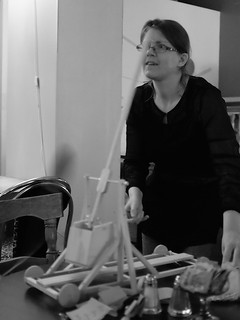 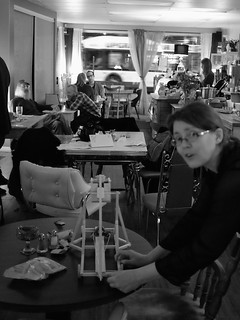 rob reported the the Raw Sugar staff looked a little alarmed at this shenanigan. But no one lost an eye, which is a good motto for every reading, isn’t it?
Lots of time after to chat in small knots of people. We closed the place down eventually. Last out the door helps fix and close the curtains.
P.S. Thanks to Dave for giving me a lift back when, once everything was set up and set up —books, chapbooks, candy favours with poems, candies to fling, cash, snacks, water, trebuchet, ballast, camera, spare batteries, lenses, materials for finishing the chapbooks (which became a bee with a bunch of people folding the last of Sneha’s mini chapbooks), and what did I forget? My set list, and poems to read. 3 bags of stuff and no poems; they were still in the printer.
P.P.S. previous post has a link to CHUO’s Click Here where you can hear a couple of the poems so long as that’s online. I archived it interviews here too. We’re about 20 minutes in.