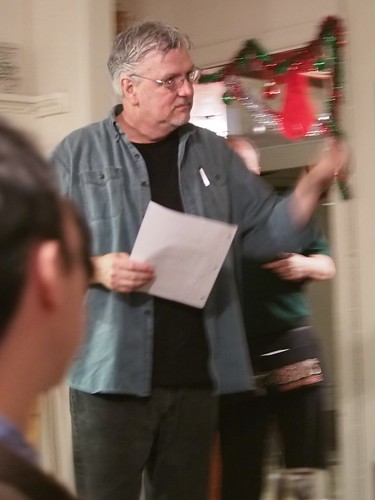 Roland at the Peter F Yacht Club last night. His poem on the page in issue adds another dimension with the stanzas floating around the page like the papers on the water in “Waist Steep”.
I came late so missed part, was still mentally arriving while Marilyn Irwin read, but in break I heard that Cameron Anstee had wowed people with his poetry. (That’s getting to be a habit.) His erasure poem wasn’t alone. Karen Massey did one as well (but with my hearing it was more of an erasure than on the page.)
A bunch of people have fallen to the flu-plague and couldn’t come but every chair was filled until more chairs were pulled in. 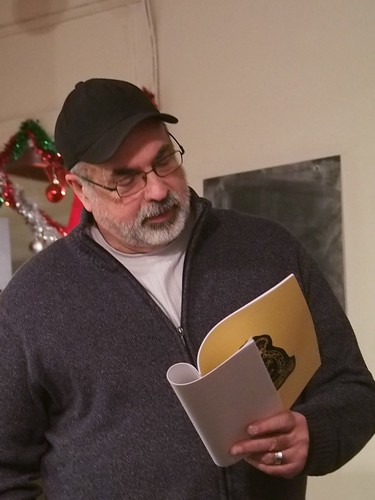 Inside the fence, guileless sunflowers
lean forward and nod.
Discarded milk cartons lie by the stump,
their pampered seedlings long freed.
He stands in the garden
trying to distinguish
the concepts from the weeds

There’s always a mix of styles. Peter Richardson did a political poem to the fallen empire of Harper (“Late Dispatch in the Reign of Stephen) which caused an oh-ripple thru the room in its wake. Ben Ladouceur was translating Emile Nelligan. rob mclennan did his densely compressed poems “bare-skin and bone,/a glossary” and “Long crossed-out: this airless tomb/of tempered wood” which I misheard as “tempered word” so heard as a poem with so much closure, exclusion of content and editing that it is like a coffin and the schooner in the poem metaphorical. Instead a sunken salvaged ship. Ah.
I tried to let experience wash over me instead of missing what was said by taking photos or catching half in notes securely (but missing some part).
Chris Johnson’s first poem of two used the word audience as a unit of measure and juxtaposed scenes in an interesting way. Seemed to be lovely 3D sub-vocals around the room of appreciating turns in it. Oh, bonus, it’s in issue “You Better You Better You Bet” and a haibun. It’s so dovetailed that I’d have to just reproduce it all. You can get the issue.
The advantage of going to a reading is seeing everybody, or as many of the everybody’s as one can and have time with a few people. The advantage of print is processing time. A reading with an issue to take away gets that down.
With this snowstorm incoming, some disappeared away quickly. Me in the first heat off with a hubby feeling under the weather at home.
Still, the tone was merry with season’s tinsel and treats, candies and cake, and people taking time to talk for a bit.
Issue 22 comes out at VERSefest in spring.
rob has given a post on the PFYC round up.