The rout/e poetry installation in the ecological reserve of Petrie Island was a poem planting event on Oct 10th. The park is on the east side of Ottawa. It went up on Thanksgiving weekend and stay up until they’re gone.
This, as with the first manifestation of the footpress, was a sort of ‘nature note’ mockup – poems placed under plexiglass on plywood and posted with 2×1’s on the trails. There are actual nature notes there too: 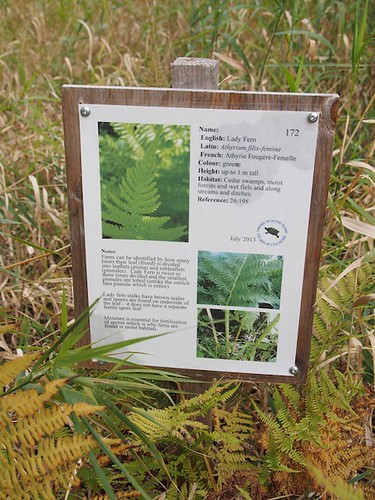 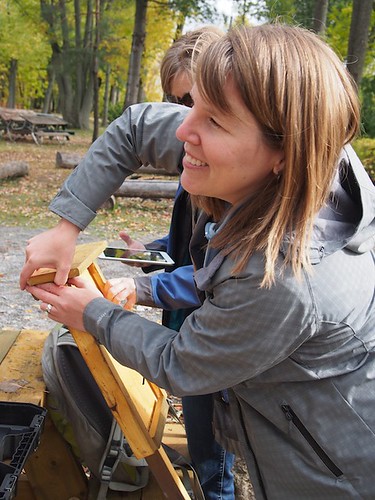 Katherine, the native flora program coordinator, fits the laminated sheets in behind the plexiglass sheet.
Poems in this installation were by: David Groulx, Roland Prevost, Pearl Pirie, Sandra Ridley, and Blaine Marchand. 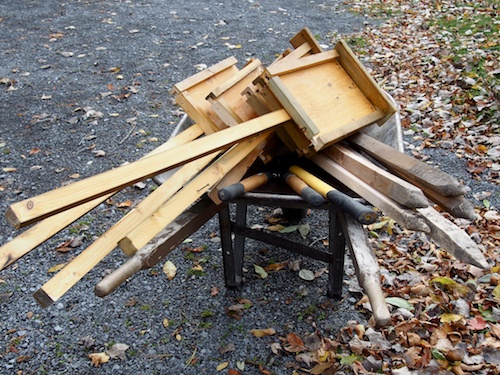 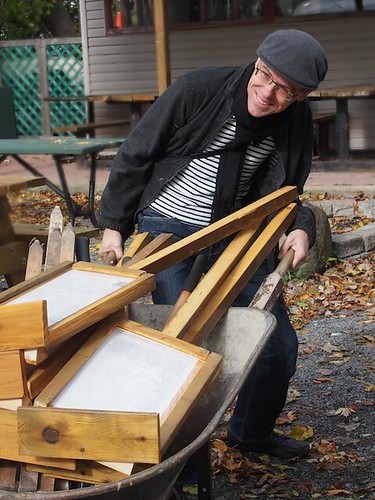 Poems being hauled by Brian Pirie. 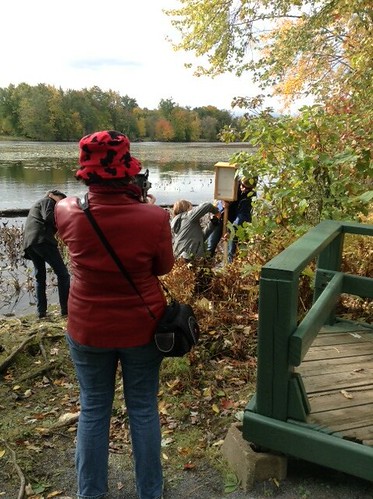 At one point there were 5 of us photographing. Some of a poem paparazzi scrum captured by Janice Tokar here as Sandra Ridley’s poem about high water is planted at the edge of the waterline that will rise in spring. This is by Turtle pond on Turtle trail. 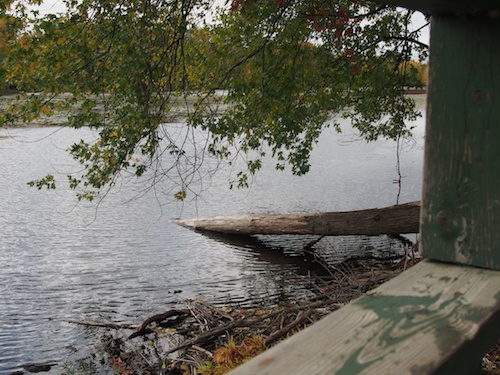 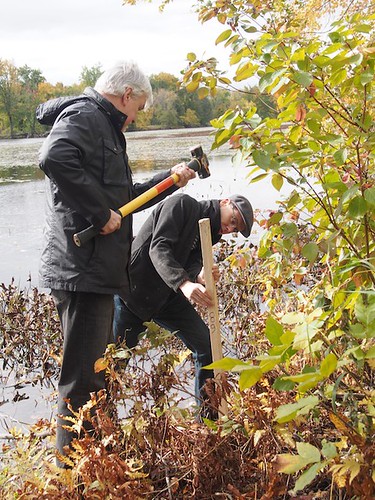 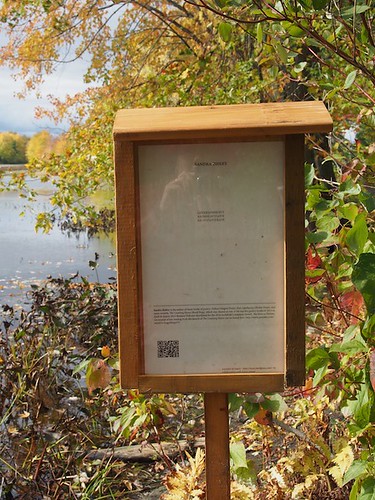 Each has a little code so if you have the app and device you can get bonus material, like Roland’s poem having background music as he reads it. 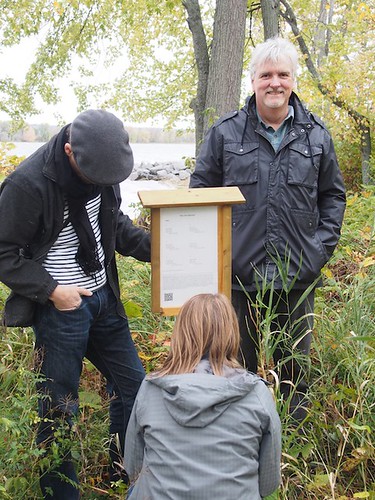 Here’s Roland with his poem. 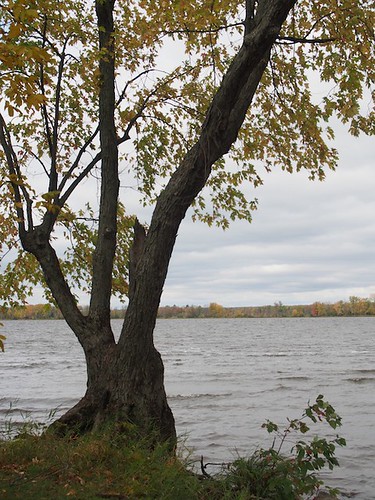 It’s out by the shore edge of the Ottawa river west of the education building. 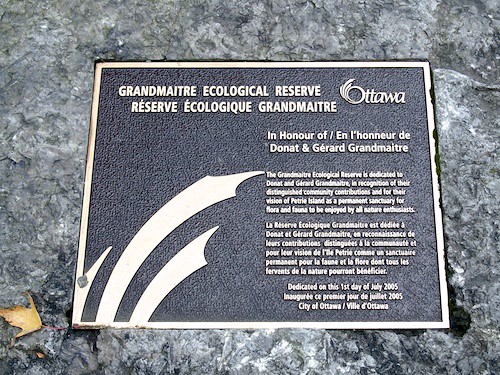 It’s a relatively new protected area. On one part there’s trails for hiking or skiing. Other area have boardwalk style seating to watch the pond. 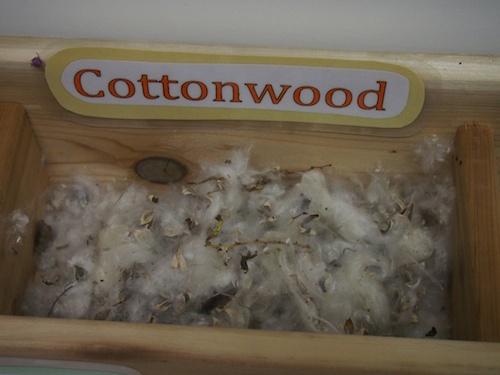 There’s also an education centre, a picnic area, a white sand beach and pontoon rentals. Someone should rent a pontoon next summer and have a poetry on the Ottawa river reading.
A little more westward, 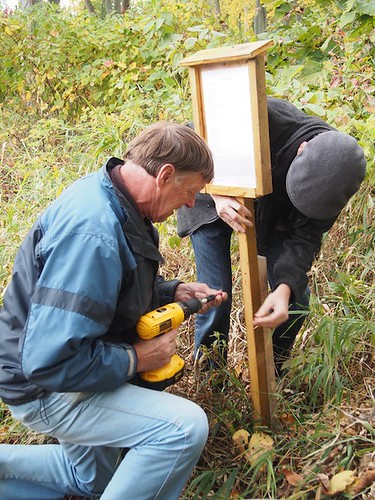 Al Tweddle (Chair of Friends of Petrie Island) and some of the other FOPI Board members were the ones who built the signs. Here is puts up the David Groulx poem set in the wildflower walk area. It is a romantic poem from his latest book about finding a quiet hideaway spot with a dead moose to make love by. 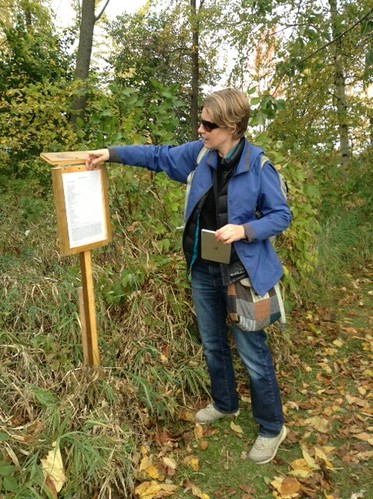 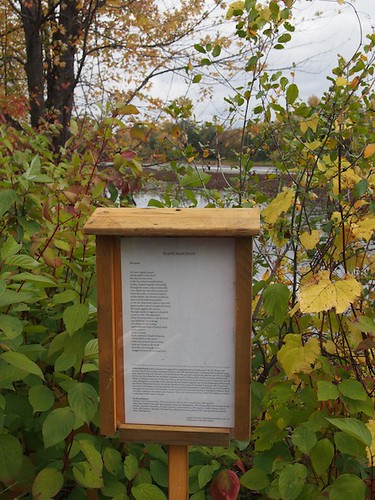 Blaine Marchand’s poem is by the chain gate at the end of the nearest section of Bill Holland trail. The poem references stones and there shore there is rocky. 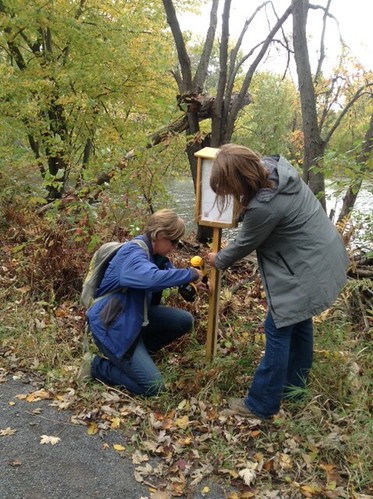 Rocky enough that there was some debate on whether a stake could be hammered in. 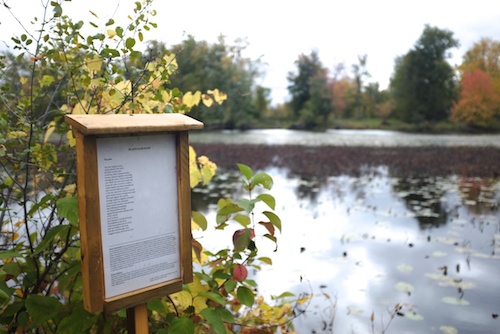 Once it was in, it is a poem with a view. 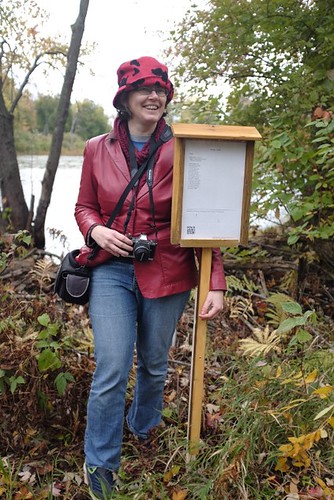 Here I am with my poem which is further east towards the parking lot of Turtle Pond trail. I thought the idea of cleft of rock and the two trees collapsed into each other (which I didn’t photograph) made the poem fit the site. 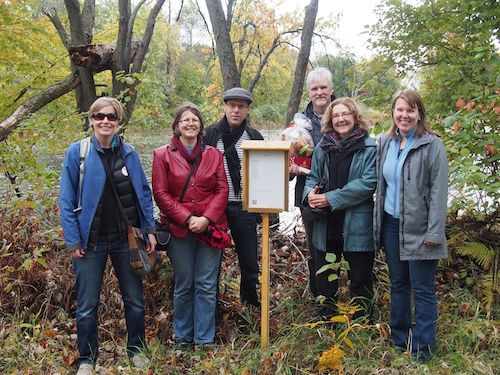 And here’s everyone who came except Al who is taking the photo.
I’m not usually one to give occasion poems but afterwards this,

flushed cheeks in a breeze
Petrie Island, Oct 10, 2014
couches are fine. commodious.
if leather, initially autumn-cool.
how did I forget the outdoors’
greatness? um, am I not even
a homebody so much as a
chairbody? my knees, willow,
in the wind, bending, harrum,
straighten, swing a thrum.
painted turtles on that
log? nope.
brisk walks with no direction to
talk towards.
no instrumeant al conversation sung,
no violins, no drums, Jan, Rol, Al,
Chris, Brian, Katherine and I. what’s past the
next corner by the butternut? silver
ripples lap gravel maps
taking turns at mallet whacks next stake from the wheelbarrow
stack
poems for sparrows, for the plein-air painters,
for the asian hikers of 3 generations who paused to ask.
grey-haired stroller to buckskin fringe-boot-swing daughter over stroller
granddad duck-nods
very good. poemwords sun fern
blend in and out like redmaplecloudsun. 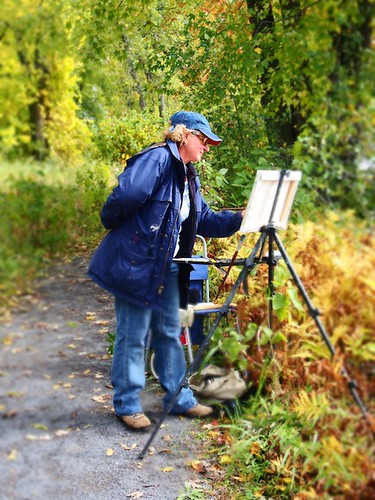 Other installation of rout/e have been at (g)roving, situated between the campus of the University of Guelph, Kemptville, and the AgroForestry Centre with poems by Monty Reid, Sandra Ridley, derek beaulieu, and at Cornerbrook, Newfoundland in the Glynmill Pond section of the Cornerbrook Stream Trail with collaborators/participants Adrian Fowler, Stephan Walke, Holly Pike, Beth Follett, Adam Beardsworth and Shosh Ganz.
In winter as with the other ones the poems catch the attention of skiers at the Glynmill Trail. Previously and still there are poems up at the Marlborough Forest trail with poems by rob mclennan and Amanda Earl.
The next version of rout/e is a large poetry installation at Baxter Conservation Area, placed as a panel in a solar array near Kars, Ontario. So far this has beaulieu’s Translating Apollinaire.