Way back on Day 3 of Versefest there was a woman’s slam performance. 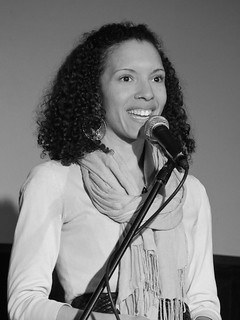 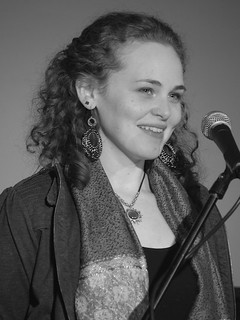 Kayla Fraser (left) organized and MCed the event where there was a roller coaster of arc with poets cycling from topic to topic on aspects of being female from dating, to assault or fear of, friendship and love, from politics to motherhood and hopes for kids. They passed seamlessly from one to another to give a faceted collage of snapshots of young women in terms of their relationships among themselves, to love, loss, family, politics and the future.
Candice Bruchhaeuser (right) was first up at mic in the many rotations over 80 minutes. She started with poem interweaving Mama said they’d be days like this. 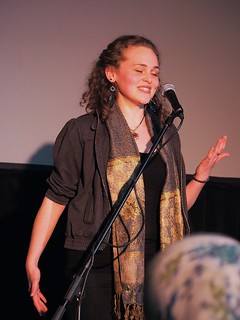 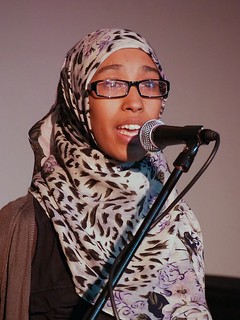 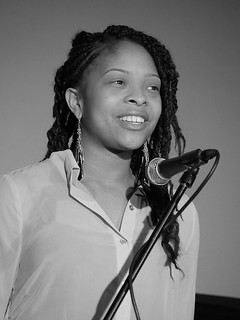 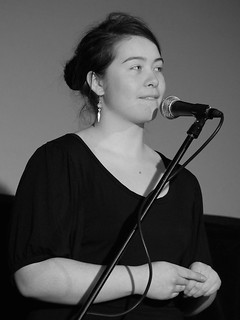 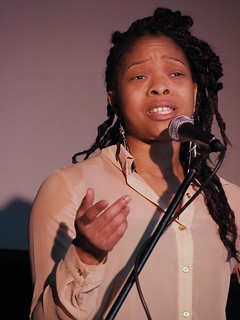 Light and Billie Jane Kearns.
Billie Jane picked up the theme and and connected to other things that mother said, like “be kind, but not stupid” and the frustrations of navigating internal and external walls of the the possible and the passible doors. “How am I supposed to makes decisions is I’m afraid of my own power?”
Light said on being judged by one’s outside as being innocuous. “Call it whatever you like but I don’t have time for that.” Black women are from governor general “to head of state yet they still expect me in a strip club?”
“I couldn’t understand my parents worryig about me until I started worry about myself”
Philosi-Fire had a poem about walking alone and feeling paranoid about being followed and starting to walk faster but then “slowed down because fast steps are louder” and then realized the shadow from behind her was herself.
She implored why is it that every time a woman is raped or killed they describe her age, description, job and clothes as if that made any difference?
Candace hooked in and questioned what it is we understand in terms of numbers from a newspaper like stock exchange or crime stats. And how is it that “this society where there’s a difference between stepping on a centipede but playing with a kitten while both are carnivorous.”
Light did one of her regular pieces that’s a crowd pleaser “you don’t need a man to be mistreated”. Treat yourself well. In a later poem “afro this, afro that. I’m an afro-desiac […] stop scratching the surface to determine the depth of my soul—black and beautiful.” A later poem talked about the failed American dream and how every avenue of “entertainment” sells violence and guns and then pretends surprise when people become violent. Was it the American dream or a nightmare or “was I never asleep”?
Philosi-Fire turned it wider to political and asked why is it not unananimous to sign petitions to end domestic violence? [UN Trust fund to educate on.] In a later poem she said, we’re taught that sexuality is a flower and if it is torn away from us we didn’t grip tight enough but “why was I taught self-defence but he was not taught consent”. And later an anti-war poem that said that if we go to war we have to write the history ad hoc to make it justified and make us victorious. In a later poem she addressed America and their various colonial aka peace/protection invasions. “How is that you come to make things better but when you leave there are scars that weren’t there before?”
Candace then turned the tune to a love poem, but love gone wrong and a chastising a furtive boyfriend playing around. “you are the big dipper but even while spooning me you are scooping another deep dark matter” and and “I’m tired of being a pillar, a lesser figure to you”. “unlike you I can’t survive on salt water. unlike you, I need a lid. do you know what a lid is?”. In a later poem she said I have been eating fire for so long is it any wonder my stomach is full of ash?
Billie Jean came back with a tribute to her best friend. “I had a text book case of new kid syndrome.” and related special memories and concluded “I know this phrase has been turned to candy corn but never forget that I here for you, dear.” She later did a recital of
Constantly Risking Absurdity (#15) by Lawrence Ferlinghetti
Each performer had a distinct way of performing with Philosi-fire holding very still and the room quieting to attentive as strength came though her words. Billie Jean moved around the room making dramatic gestures and poses like theatre. Candace reenacted/relived her poems pouring herself into the emotions again. Light was extremely animate of face, and held postures and conversational inflections.
I think the last poem was by Philosi-fire and the letter to her future daughter: “I can’t promise you many things but I can promise you this: you’ll make mistakes.” I’ll tell you to be wary of people who tell you what your dreams are”
and “just because you look up to someone doesn’t mean that they can look down on you. It just means that they’re a little taller.”
*
This month, Words to Live By Series will be showcasing a talented and up-and-coming poet, Philosi-fire Tuesday April 29th, 7:00pm – 9:00pm Pressed Café, 750 Gladstone.

Roua, also known as Philosi-fire, is a free spirit. She spends most of her time creating schedules only to not follow them so that she can make new ones. Roua has a habit of daydreaming at unsuitable times and gets excited about spring, birthdays, and watching the current of the Ottawa river.
Despite her optimistic views Roua’s poetry expresses the bitter and unspoken side of life. Roua’s goal is to have a positive impact on the world even if the world means just one person.