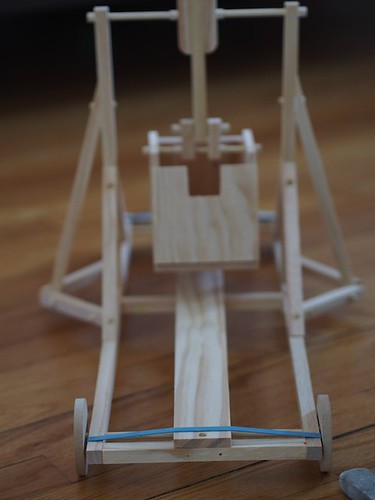 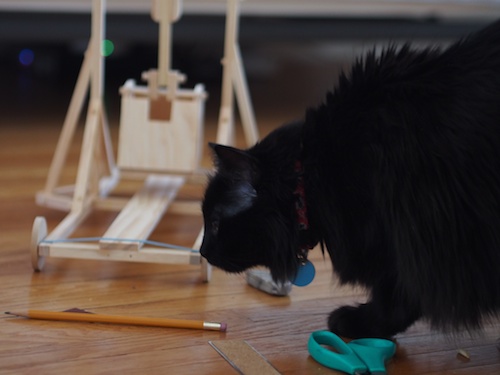 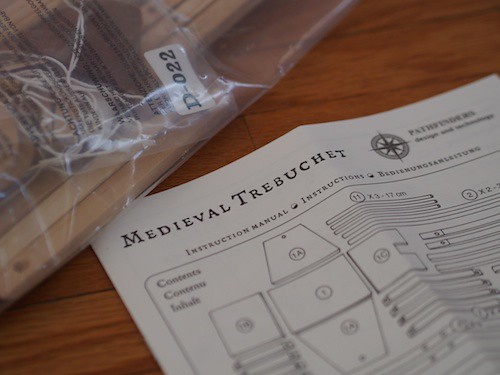 When supervisor cat wasn’t lying on the instructions. 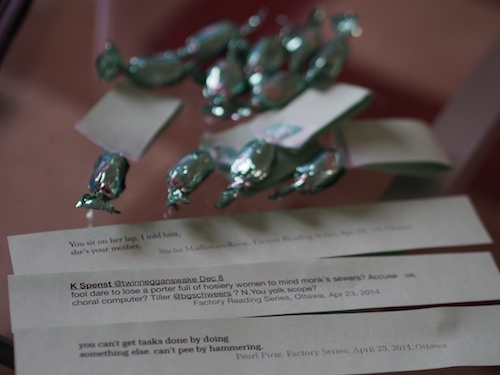 The launch projectiles include a dozen excerpts from each of the poets attached to a mint or chocolate mint candy.
If test flings are, er, ah, problematic, the poems will be party favours on the tables.
Who reads? You know this, right? Pearl Pirie (Ottawa), Kevin Spenst (Vancouver) + Sneha Madhavan-Reese (Ottawa) (lovingly hosted by rob mclennan)
Wednesday, April 23, 2014;
doors 7pm; reading 7:30pm
Raw Sugar Cafe
692 Somerset Street West (1 block west of Bronson)
author bios:
Pearl Pirie has a few chapbooks, a micro press, several blogs, a gig as literary radio host and irregular gigs to teach poetry. She has two poetry collections, and a third forthcoming with BookThug in 2015. None of these poems are in them so you have to buy them both.
She will be launching the chapbook vertigoheel for the dilly (2013), her fourth above/ground press publication and second chapbook, after oath in the boathouse (2008).
In addition to the UK, the United States, Austria and India, Kevin Spenst’s poetry has appeared in over a dozen Canadian literary publications such as Freefall, Prairie Fire, CV2, Dandelion, filling Station, qwerty, and Poetry is Dead. His work has been shortlisted for the Robert Kroetsch Award for Innovative Poetry and his manuscript Ignite has come in as a finalist for the Alfred G. Bailey Prize. In 2011, he won the Lush Triumphant Award for Poetry. In 2014 he is going to do a 100-venue reading tour across Canada with his chapbooks Pray Goodbye (the Alfred Gustav Press, 2013), Retractable (the serif of nottingham, 2013), Happy Hollow and the Surrey Suite (self-published, 2012), What the Frag Meant (100 tetes press, 2014) and Surrey Sonnets (JackPine press, 2014). Follow the chapbook tour at kevinspenst.com
Born in Detroit, Sneha Madhavan-Reese [pictured, above] calls Ottawa home. Her poetry has appeared in Arc, Descant, and The Antigonish Review. Her debut poetry collection is forthcoming in 2016 from Hagios Press.