A few more things from Versefest.
Sue Goyette read. She warned before her reading think of it like technomusic. The poems make no sense. There’s no decoder ring, no test afterwards. You get them or you don’t. 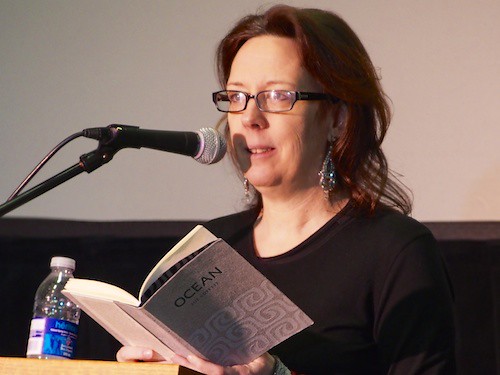 You probably already have Sue Goyette’s Ocean right? Before or after it was short-listed for the Griffin?
Funny how books sit on a book table. Some go, most stay then a poet reads and there’s a Boxing-Day-style scrimmage to get copies.
At a festival it’s good to get your must-buys in the first sweep. If you wait until after the person reads or the festival end, they’ll be all gone.
She had an easy patter, a comic timing, and looked at home at the mic as she set the audience at ease.
Her poems didn’t ride the expected path but have little twists of humour in there. It doesn’t read flat. Starting walking along a waterfront in the east coast and one can tangent to anywhere in social commentary or history. 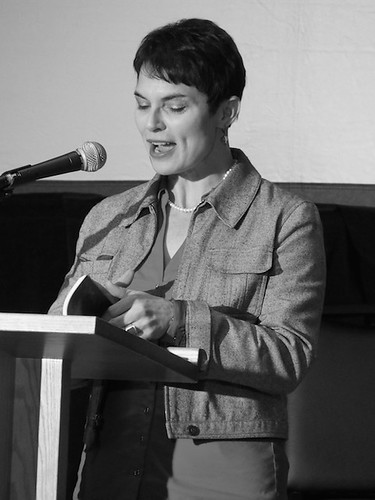 Karen Connolly also mid-career (or “senior poet” which sounds like one should get free coffee and priority seating) to an attentive very full room. It’s sweet to see such a large crowd out for poetry when its not even slam. As many as there were you could hear a pin drop in her tribute to missing women. Probably someone could burst in and try to do a hold-up and would be ignored or shushed. She also wrote of “the good man who left a trail in his wake like phosphorescence” and how Calgary has changed, the riverfront becoming expensive real estate where “I cannot afford to be nostalgic by the glass”

David McFadden also read and had the room converted to tame chickadees resting on his palm. Overheard: he’s so cute I just want to take him home. I just want to eat his cheeks.
Maybe that starts with his gentleman’s approach to be called to the mic. First things first, he kisses his partner Merlin, congratulates and greets his fellow reader, thanks the person who introduces him and then goes up and delivers some gently comic good natured poems.
He read from his previous collections but mostly from his spring collection from Mansfield Press.
Here’s some hopefully correctly quoted bits to give you a flavour.
it wouldn’t be me
I’d want to be
I’d want to be
John Wayne
or my mom
every day we age
two days and every night
we get one day younger
Ian says
that as I walk down
government street
cherry blossoms
fall from the trees.
it’s hard to be serene
when every minute or so
another frog
of 5 or 7 syllables
hops into the pool.
And lastly, from longer poem was about being in small town Canada
“as Stomping Tom plays in a café and people are talking about snowmobiling. I was at home. My heart, usually the size of a dried plum, grew until it filled the whole room.”
He’s working on his 102 sonnet collection to come out soon too. 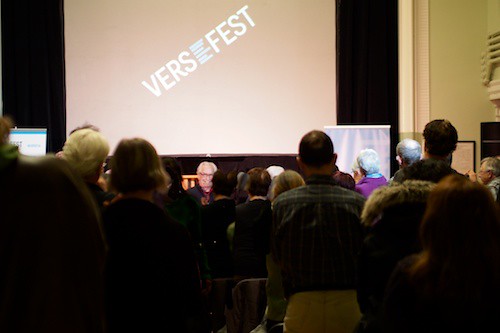 When he finished reading there was a whole room standing ovation. 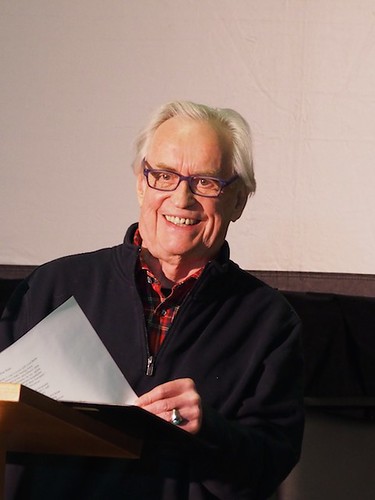 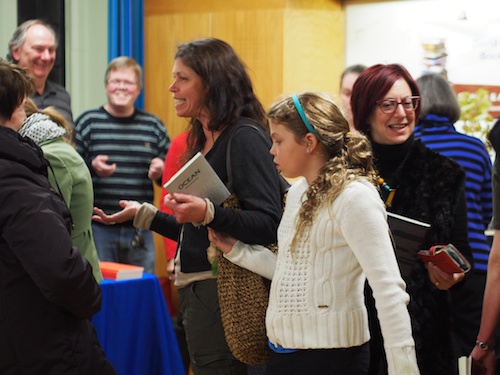 And then the melee for books and conversations.